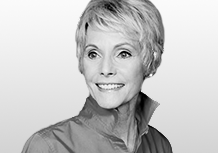 Russian President Vladimir Putin, a leader known for his unpredictability, may have met his match: the new President of the United States, Donald Trump.

Until now, Mr. Putin knew who he was dealing with. Republicans or Democrats, the U.S. presidents he has encountered supported principles of the Western liberal democratic order. Enter Trump, a maelstrom of internally contradictory viewpoints. Mr. Putin’s biggest job initially may be to decipher just what Mr. Trump actually believes.

Trump does have one core belief: “America First.” But that does not necessarily mean that America will take the first step.

In Moscow, “America First” is being interpreted as “much less interventionism,” says Fyodor Lukyanov, Editor of Russia in Global Affairs Journal. And that’s something Vladimir Putin will welcome.

“Trump’s message to many nations and many regions, including the Middle East,” he says, “is ‘We have nothing to gain there, so go to Hell!’ And, in this regard, that’s exactly what Russia was trying to say to the United States for quite a long time.”

Trump, he says, “is not about regime change, he is not about nation-building, he is not about bringing values or something else to other countries.” With the pro-democracy “color revolutions” in Ukraine and Georgia, Putin was convinced that Russia – and he himself – were next on America’s subversion hit list.

The switch in U.S. leadership may please Putin but putting values on the back burner worries some in the United States. Retired Ambassador Kenneth Yalowitz says being true to its values is what defines U.S. foreign policy.

But Lukyanov says President Putin cannot breathe a sigh of relief that the U.S. will sit out the next round internationally.

“It does not mean that Trump will not use force,” he says, “because Trump is in favor of using force, not to promote democracy or to change regimes, but just to show who is the boss. That America is great, America is the boss.”

Symbolically, the Putin/Trump relationship could be off to a new start when they meet in person, which most observers believe could happen relatively early in the Trump presidency. But, despite Trump and Putin’s mutual admiration society, many foreign policy experts downplay the prospects for any dramatic change.

Relations between the U.S. and Russia are “cyclical,” they say, with ups and downs over the course of decades. There have been  “bromances” before, like the first meeting between George W. Bush and Vladimir Putin in 2001 when Bush, famously, said he “looked the man in the eye” and “was able to get a sense of his soul.” The relationship soon turned sour.

Fyodor Lukyanov believes Putin’s compliments toward Trump are “more to show that Russia is up for serious conversation.”

Ambassador Kenneth Yalowitz says he hopes Trump won’t rush to set up a meeting with Putin.

“My hope and prayer is that this does not happen for a while,” he says, because there’s an awful lot of work when heads of state meet, and that should go into preparing for such a meeting.”

“There needs to be re-establishment of a dialogue. We need to get people talking to each other, and I think we need to figure out where they’re coming from, where we’re coming from.”

Recently, the two countries have shut down most communication; the Obama administration, in an effort to punish Russia for its annexation of Crimea and incursions in Ukraine, suspended meetings and projects of the U.S.-Russian Bilateral Presidential Commission, which had kept the dialogue going on everything from arms control to agriculture.

Putin and Trump are likely to bond on one thing: a tough-guy approach to terrorism. Trump’s vow to “bomb the shit out of” ISIS-controlled oil depots sounds almost like Putin’s promise during the Chechen war to “wipe them (terrorists) out in the outhouse.”

During the presidential campaign, Trump praised Russia – along with Iran and Syrian president Bashar al-Assad – for fighting ISIS and indicated he might support their efforts.

“If the conflict is reduced to Assad versus ISIS, I think this will be an opportunity – talking cynically – for better cooperation on anti-terrorism between Russia and the United States,” says Maria Lipman, Editor-in-Chief of Counterpoint journal, “But I cannot see where else the two nations can come to terms.”

Fighting terrorism, however, does not mean Russia and the U.S. agree on who, exactly, is a terrorist, a problem that bedeviled negotiations between Secretary of State John Kerry and Russian Foreign Minister Sergey Lavrov.

“My guess is, yes, they could can talk about an alliance,” says ambassador Kenneth Yalowitz,  “but when you put our military sitting down with the Russian military, they’re going to have the same problems, I think, that we had before: trying to define who is the common enemy.”

Putin may harbor some hope that Trump will weaken, or even try to end, economic sanctions imposed by the U.S. and European Union over his actions in Ukraine. The sanctions have slowed the Russian economy, but oil prices have done more damage. The Russian president claims the sanctions aren’t really hurting Russia anyway. In another salty riposte, he told reporters that Europe can “get lost!” if it thinks Moscow will give up its own counter-sanctions.

Obama invoked sanctions with executive orders and Trump could use the same method to weaken them. But if he did, Europe would likely jump ship too, upending the entire sanctions regime. So far, Trump’s team won’t explain what he will do, his chief of staff, Reince Priebus, saying only “you have to just wait and see.”

In the meantime, Europe voted to extend sanctions for another six months, and some U.S. lawmakers are calling for expanded sanctions on Moscow, setting up a potential confrontation with Trump in his first days in office.

“We could talk about sanctions being eased,” Maria Lipman says.  “Less pressure on foreign companies to deal with those Russian companies that are not under sanctions. But sanctions will not be lifted, that’s for sure.”

Let’s Do a Deal

Throughout his election campaign, Donald Trump almost wishfully repeated the phrase, “Wouldn’t it be great if we actually got along with Russia?” At least on the surface, Vladimir Putin, a post-Soviet pragmatist, appears ready for a “reset” – although both men shun the term made infamous by then-Secretary of State Hillary Clinton.

But, both in Moscow and in Washington, geo-political deal-making à la business deals is greeted with skepticism. Trade between Russia and the U.S. is a drop in the bucket compared to trade with Europe, and political horse-trading just doesn’t work that way, foreign policy experts say.

“I don’t believe in simple deals in politics,” says Fyodor Lukyanov. “I think that’s one of the problems Trump will face. Because, being a businessperson, he believes that business mentality is applicable to anything else, and deals are possible on everything, including national interests, which is not the case. There is room for many deals in foreign policy but not everything is up for a deal and that might be something like an unexpected surprise to Trump.”

Ambassador Yalowitz agrees: “My guess is that Mr. Trump is going to have to learn a lot about reality and about what’s going on in the world, that you simply can’t make deals like this is real estate. Diplomacy and international relations are a lot more complicated, and he’s got a big learning curve ahead of him.”

If Vladimir Putin is looking for clues as to where Donald Trump’s relationship with him, and with Russia, is headed, he could take the usual approach: study the people who will advise the new U.S. president’s cabinet.

Rex Tillerson, chief executive of Exxon Mobil and Trumps’ choice for Secretary of State, is a friend of Putin – at least a business friend, known as a consummate deal-maker and sanctions skeptic.

Mattis, in contrast to his future boss, calls Putin a “clear threat” to the U.S. and its European allies, who aims to “break NATO apart.”

Trump’s choice for National Security Advisor, retired Lieutenant General Michael Flynn, also has met Putin, even sitting at Putin’s table at a celebration in Moscow for Russia’s RT TV and did a paid interview for the network. He’s spoken out for better relations with Russia.

Some Russian state media put a positive spin on this mishmash of views, interpreting it as Trump’s way of avoiding looking too “dovish” or too “hawkish” on Russia. Vladimir Putin, a former KGB officer, undoubtedly is using every tool at his disposal to analyze what it all means.

“The people he is appointing have fairly traditional views on U.S. foreign policy,” says Ambassador Yalowitz. “We’ve had 70 years of foreign policy since the end of WWII, and there really has been a strong consensus that has developed, and I just don’t see any new person coming in and sort of ripping that all up and saying, ‘We’re going to start over again.’”

But will Trump listen to his cabinet? No one knows. “I hope he has good advisors, who give him good advice, and that he heeds it,” says Yalowitz, “because if not, mistakes will be made.”

Who Takes the First Step?

During the campaign, Donald Trump promised to stop solving – and paying for – the world’s problems and focus on America’s own domestic challenges. If that means the U.S. withdraws internationally, Vladimir Putin could pick up the slack. It is not, however, a role he’s used to, or even, perhaps, might relish.

After all, Putin’s foreign policy has been more reaction than action. The Russian leader got used to watching what the Americans were doing, and then criticizing – or exploiting – mistakes the U.S. made. As Fyodor Lukyanov says jokingly, “Now, Russia will need to make its own mistakes!”

With predictable U.S. presidents—leaders he knew wouldn’t go off the rails and upend international relations – Putin could afford to be unpredictable. Now, the shoe is on the other foot, and it’s unclear who will take the first step.

The Author is Jill Dougherty