For the seven million people of Hong Kong, living next to a rising China, this year marks three important anniversaries.  Most commentary focused on the Handover 20 years ago when Hong Kong went from British to Chinese sovereignty.  The other events, the 50th anniversary of pro-communist riots and the 20th anniversary of the Asian financial crisis, provide a deeper picture of Hong Kong’s future challenges and strengths.

Much attention concerned the anniversary of the Handover (or “Return” as the mainlanders call it) marked with the pomp of a royal visit by Chinese President Xi Jinping. President Xi came to celebrate one country-two systems, the formula under which a Chinese Hong Kong governs itself.  With his imperial overtones and military review, Xi hit hard on the one-country side but he said enough about two-systems and the importance of Hong Kong’s “unique strengths” to balance the scales for most.  During my recent visit at the time of the anniversary, many noted his hard line but wrote it off as what was expected.

The Chinese President offered no apologies for intervention on matters that “threaten” China. This is the underlying justification for the abduction of booksellers who publish scurrilous information about the leadership in Beijing or legal intervention to prevent pro-independence legislators from taking their seats.  Several former officials and leaders I spoke to, from both sides of the political spectrum, told me ‘Hong Kongers have yet to think through where they want to draw the line between one country and two systems.’  President Xi drew his line; Hong Kongers have yet to draw theirs. 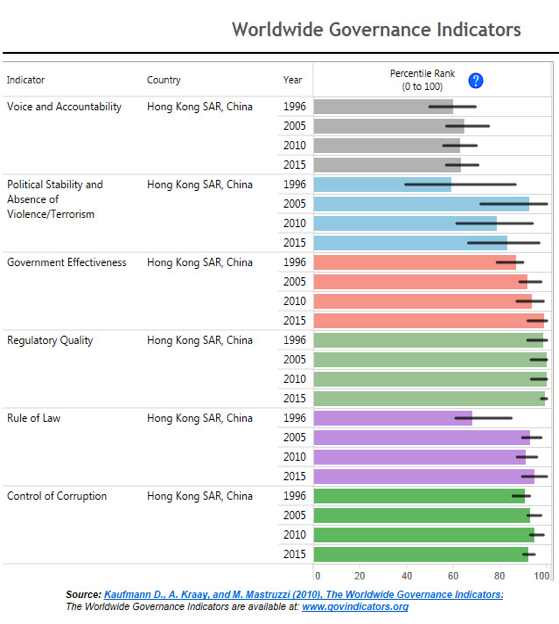 Hong Kong continues to boom;  the buildings are taller and the harbor is smaller than 20 years ago. Inequality has grown, property prices have soared and mainland tourists make some rich, even if many locals characterize the visitors as arrogant.  Stresses and strains abound.

Yet, as even President Xi noted, Hong Kong maintains its high rankings on the Worldwide Governance Indicators for good government, anti-corruption, and rule of law, in many cases higher now than under the British colonial government.  During his visit, President Xi launched a “bond connect” program so that China can benefit from Hong Kong’s excellent financial systems to cycle capital into the mainland.

Many of us who care about Hong Kong and follow events closely believe that the cases of Chinese intervention and the failure to institute universal suffrage violate Hong Kong’s Basic Law and merit sharp criticism.  But, they do not presage a Chinese takeover.

Which brings us to the anniversary of the pro-Communist riots of 1967.   With the Cultural Revolution raging just over the border in China, pro-communist labor unions called strikes and attacked the police.  Over five months, 51 people were killed, 5000 arrested and 8000 bombs exploded or were defused.  The British position was tenuous.  Many feared that Red Guards would flood across the border;  a reminder of how vulnerable Hong Kong is to political spillover from the mainland.

Finally, let’s not forget that the day after the Handover in 1997, the Thai Baht cratered and economies from Korea to Indonesia suffered badly.  U.S. and foreign banks called in their loans.  Governments fell.  Currency pegs broke.  Some, like Malaysia, erected barriers; others like Thailand and Indonesia implemented harsh IMF reforms. Through all the turmoil, Hong Kong maintained its position as a business and financial center.  Hong Kong‘s dollar peg endured despite ruthless attacks that autumn by global hedge funds who thought they could break the Hong Kong dollar the way they’d broken the British pound a few years before.  Then Financial Secretary Donald Tsang, who deftly beat back the assault, told me at the time, “No one ever made money betting against Hong Kong.”

Now, Hong Kong faces a new economic dilemma.  Its role as a low-cost manufacturing and logistics center has long been displaced by China. The design and creative community now straddles the border.  Hong Kong needs to improve education to prepare its youth for a new era and enable small business to compete with better-educated and more-dynamic mainlanders.

Global value chains, whereby Hong Kong enterprises organized and profited from the production and distribution processes, are changing as well.  Factories are moving: some to new low wage destinations like Vietnam, Mauritius, or even Ethiopia and others to automated facilities close to their customers in China and North America.  Hong Kong’s financial and legal center should attract the financing and deal-making of new value chains and automated manufacturing.  To keep that pivotal role, however, Hong Kong must protect its judicial integrity, provide high-value professional services like banking and accounting, and safeguard markets that actively prevent corruption. I asked several industrialists and economists, where does a startup in Shenzhen want to do its initial public offering?  Their unanimous answer was, “Hong Kong, if they can meet the requirements.”  Hong Kong’s “requirements,” the integrity of its systems, the unique strengths that President Xi Jinping noted, bode well for Hong Kong’s future, if they endure.

What can we learn from three anniversaries?   First, living next door to China may not be easy but Hong Kong has no choice.  Both Hong Kong citizens and investors need to keep speaking out for “two systems,” for the rights of Hong Kong citizens, and the integrity of its institutions, but with the knowledge that they have to get along with their big neighbor.  To quote Woody Allen, “And the lion will lie down with the lamb, but the lamb won’t get much sleep.”

Second, Hong Kong’s future will be determined by the integrity of its judicial and government systems.  Most people I met this month said they hoped the new Chief Executive, Carrie Lam, can manage the politics of Hong Kong to execute projects and plans to keep business humming but also to build public housing and improve education.  We must all wish her every success.

Hong Kong remains an extraordinary city, facing historic economic as well as political challenges. Yet, somehow, I have faith because no one ever made money by betting against Hong Kong.