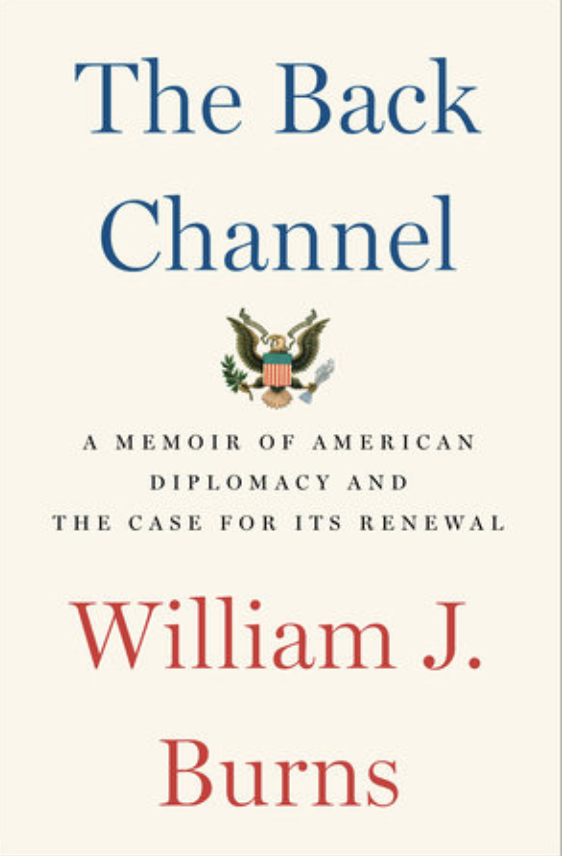 BOOK REVIEW: The Back Channel: A Memoir of American Diplomacy and the Case for Its Renewal

Writing a memoir is something of a rite of passage for retiring senior government officials and diplomats. The better ones make a big splash shortly following their release and then slowly fade to the shelves of the local or university library.

The Back Channel: A Memoir of American Diplomacy and The Case for Its Renewal will be different. Much different. Author Bill Burns is arguably America’s most distinguished and respected career diplomat of the last four decades, having served under five presidents and ten secretaries state and earning the confidence and trust of all of them.

During his long career, Burns seemed to bounce between two of the most conflicted and turmoil-ridden regions of the world, the Middle East and Russia, rising to ambassador in each of them. Few regions test the mettle of anyone like these two. Following a stint as Under Secretary of State for Political Affairs at the State Department, usually seen as the top job for a career diplomat, Burns became Deputy Secretary of State, only the second Foreign Service officer to hold that position. To distinguish himself further, at the end of the George W. Bush administration, he was asked to continue as Deputy Secretary of State under Barack Obama, a rare occurrence in any administration change.

But what is most distinctive and instructive of Back Channel is the close-up, almost in-the-room sharing of the last four decades’ most historic events in foreign and national security policy. His retelling combined with his incisive and sage assessment of what they would mean for the U.S., is what will make his book worth reading and re-reading by anyone responsible for, or involved in, foreign policy. Policy makers, diplomats, military and intelligence officers, Members of Congress and any American interested in American diplomacy, its awesome potential and its often overlooked limits, will benefit immensely from Burns’ accounts of the events of his remarkable career and what they have to tell us today.

Burns relates his experiences serving under Secretary of State James Baker during the fall of the Soviet Union and his and President George H. W. Bush’s masterful management of what could easily have ended in a global calamity. (Note: From my own perch in the Office of Soviet Union Affairs at State at the time, I saw firsthand the stress the administration felt from the real threat of nuclear weapons let lose by “rogue” elements of the Red Army who were feeling humiliated at their nation’s dissolution.)

One year later, seated behind Baker at the Madrid Conference, Burns recounts the extraordinary gathering of Middle Eastern and other nations to address the Arab-Israeli conflict. The gathering was called by the United States following the first Gulf War when it became evident that America stood at the top of a new, unipolar world. Just as in the immediate aftermath of World War II, when the US had taken sole possession of the same position, the United States again acted out of “enlightened self-interest” not by gloating and seeking to pursue its own self-interests but rather advancing the best interests of all nations in pursuit of global security, stability and prosperity in a historically unstable region.

As American Ambassador to Moscow, Burns met often with its then and now President, Vladimir Putin. The Putin whom America and the world sees today – who seeks spheres of influence, sows instability and befriends any and all would-be autocrat and U.S. adversaries from Tehran to Damascus to Caracas – is the very Putin Burns experienced in his three years in Moscow. Putin bears a grudge, holding America responsible not only for the fall of the Soviet Union but also for spreading instability in the form of respect for human rights, rule of law, democracy and alliance building. Had there been any doubt before, Putin now stands exposed.

Another message of Burns’ memoir is the many shortcomings and limits of American power. Nowhere was that more evident than Iraq and the 2003 invasion. He offers a sound explanation of his hesitation to support the action but, in the best tradition of the Foreign Service, subsequently followed the administration’s policy and sought to advance it. He also thoughtfully shares his thinking about why he did not resign from the Foreign Service as others did out of protest for the policy. This is profoundly important not just for those serving in government but most especially for elected and politically-appointed officials who come and go and often doubt the commitment, dedication and even loyalty of those career professionals throughout government who serve across multiple administrations of both parties.

As Deputy Secretary under President Obama, Burns led the secret talks with Iran over that nation’s fast-developing nuclear weapons program. The talks, hosted by Oman over a period of two years, ultimately led to the Joint Comprehensive Plan of Action, aka Iran nuclear accords, between the P5+1 and Iran. Burns recounts his many doubts and frustrations during the course of those early talks as well as his fears that they would be exposed, which would spoil the best chance the two long-feuding nations would have to resolve the single most divisive and volatile issue between them.

What is evident from his telling of those tense negotiating sessions with Iran is the enormous capability of American diplomacy when backed by our unparalleled military might and economic clout. And in his last chapter, he explains how the nation can reclaim the moral and political high ground by employing those prodigious capabilities that America, which he describes as “the pivotal power” in today’s world, still possesses. But it must begin with revitalizing its diplomacy, America’s “tool of first resort.”

It is wise advice that every policy maker should heed. In shaping their own foreign policy positions, the growing list of candidates for the 2020 presidential election would do well to scrutinize carefully Burns’ invaluable words of wisdom about not only the unique role that only America can play in the world, but also the many constraints and traps of the enormous power and influence America still wields in a new world of complex transnational issues and big power rivalries.

The Back Channel earns a prestigious four out of four trench coats.

Gary Grappo is a former U.S. ambassador who held senior positions including Minister Counselor for Political Affairs at the U.S. Embassy in Baghdad; U.S. Ambassador to the Sultanate of Oman; and Charge d’Affaires and Deputy Chief of Mission of the U.S. Embassy in Riyadh, Kingdom of Saudi Arabia. As a career member of the Senior Foreign Service of the U.S. Department of State, he served as Envoy and Head of Mission of the Office of the Quartet Representative, the Honorable Mr. Tony Blair, in Jerusalem. He’s currently a Distinguished Fellow at the Center for Middle East Studies at the Korbel School for International Studies, University of Denver.

Read more from Grappo in The Cipher Brief…

The Author is The Back Channel