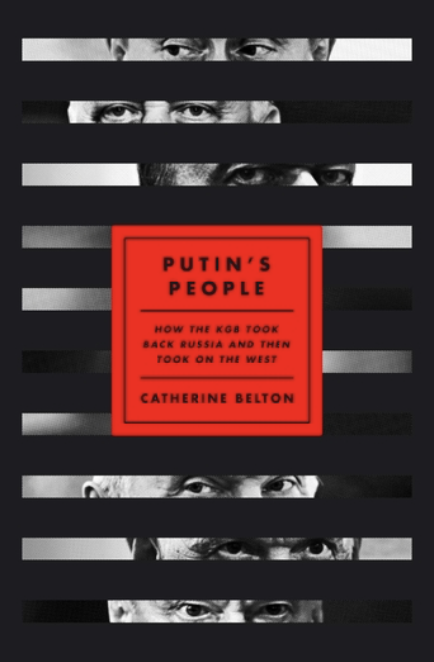 BOOK REVIEW:  Putin’s People: How the KGB Took Back Russia and Then Took on the West

Reviewer and Cipher Brief Expert John Sipher retired in 2014 after a 28-year career in the CIA’s National Clandestine Service, which included serving in Moscow and running the CIA’s Russia operations. He retired as a member of the CIA’s Senior Intelligence and is the co-founder of Spycraft Entertainment.

Putin’s People, by former Financial Times Moscow correspondent Catherine Belton could be re-titled “KGB Capitalism” or “The KGB’s Revenge.” Belton uses a wide variety of new sources, witnesses and insiders to chronicle the rise of Vladimir Putin, and is the single best book to explain the present-day Kremlin, its internal challenges and its enduring threat to the west.

While the term “deep state” is casually thrown around these days by US politicians, “Putin’s People” is a story of Russia’s KGB deep state that seized the Kremlin, and runs the state like a criminal gang. Belton describes Putin’s hijacking of the Soviet KGB’s smuggling, money laundering and illicit espionage networks to build a security state that controls the economic, media and legal systems in modern Russia. In the process, Putin made himself and his cronies rich, and created an unaccountable slush fund of dirty money to maintain control at home and undermine and corrupt the West.

There are a number of good books on Putin’s rise. However, there is sparse public information about Putin’s career in the KGB, or his single foreign posting in Dresden, East Germany. Putin himself has written about watching the breakup of the Soviet Union and fall of the Soviet empire while serving abroad. His conviction that the Soviet Union failed to use necessary brute force, and therefore died of a paralysis of power became the foundational myth of his Presidency.

Most western histories describe Dresden as a backwater in the Cold War, and Putin as a low-level functionary. Alternatively, his allies in the KGB have insisted that his real role was much more important, hinting that he was involved with the prestigious Soviet illegals program. In an effort to better understand Putin’s role in Dresden, Belton spoke to numerous sources to better understand KGB activity in Dresden in the late 1980s.

According to Belton, support for international terrorism was one of the most important services the East German Stasi provided the KGB. Due to its distance from Berlin and western diplomats, Dresden was the primary spot for the KGB to meet and direct its terrorist and smuggling networks. Several of Belton’s sources describe Putin meeting with terrorists from the violent Red Army faction and Popular Front for the Liberation of Palestine while in Dresden. The East German city was also a hub for high-tech smuggling and money laundering operations into Europe. As Belton tells it, it was these smuggling and covert banking networks that would come in handy for Putin and his cronies as they took power in the late 90s.

By 1991, Putin had returned to his hometown, which had changed its name from Leningrad to St. Petersburg. Putin sought out his former law school professor Anatoly Sobchak, who had become St. Petersburg’s mayor. Sobchak enlisted Putin as his deputy for “foreign economic relations,” managing relationships with foreign business and financial interests. Since Sobchak had little interest in running the city, he left it to Putin to navigate the chaos of post-Soviet collapse and bring money to the city in any way he could. Putin developed alliances with his old KGB allies and local criminal groups to hand out export licenses, build front companies, and create slush funds to bankroll projects and benefit themselves. According to Belton, St. Petersburg’s sea port “became ground zero for an alliance between the KGB and organized crime.”

By the time he reached the office of President, the outlines of Putin’s efforts to consolidate power were well known. Shortly after becoming President, he arrested key figures in Russia’s independent media, insuring a Kremlin-controlled media environment. He next weakened Russia’s governors by removing their seats from the upper chamber of Parliament (and thereby removing their immunity from prosecution). Before long he abolished elections for Governors altogether and instituted a system where regional leaders would be installed by the Kremlin. He created a rubber stamp Parliament based on a single-party system, and a legal/court system that was controlled by the Kremlin. Putin’s Kremlin used the criminal justice system as a weapon, launching a series of public raids/arrests to scare the oligarchs and tycoons out of politics. According to Belton, his control of the police, prosecutors and courts became, “a predatory machine that took over businesses and removed political rivals for Putin’s ruling elite.”

As Belton describes, the point of no return was the 2004 Kremlin takeover of the massive Yukos oil company, and arrest of its CEO, the richest man in Russia, Mikhail Khodorkovsky. Khodorkovsky was integrating his oil company with western firms, something that would allow increased western engagement in the strategic oil and gas sector. Putin continued to tell the west that he welcomed their investment, but at the same time set in motion a system that would exclude western ownership and visibility. Khodorkovsky’s arrest and imprisonment sent shockwaves through the Russian business community. From then on, the private sector in Russia knew they could be arrested at any time, and staying on the right side of the Kremlin was necessary to survive.

Putin’s rise allowed him to consolidate unimaginable power and wealth, but the system he created brought with it serious, long-term weaknesses as well.

Among the most painful sections of Belton’s study is how easily Putin manipulated, compromised and weakened the west. Western greed and inattention helped Putin build a corrupt and wealthy state determined to undermine western values. Throughout Putin’s time in office, western bankers, real-estate interests, lawyers and politicians gladly accepted Russian cash with almost no effort to determine its origin or the consequences of its theft. Cities like London became awash in Russian cash. Many told themselves that capitalism would change Russia, but instead Russian dirty money weakened the west’s own rule-based system and corrupted its politics. In the process they facilitated the creation of black cash slush funds that helped legitimize the state takeover of Russia by Putin’s KGB cronies.

From his time in the KGB, Putin knew well that it was easy to corrupt the western elite with money. The Kremlin’s cynical use of western court judgments, legal firms and banks confirmed Putin’s view that anyone in the west could be bought. Among those who were comfortable accepting dirty Russian money was Donald Trump. While Belton avoids concluding that Trump conspired with Russian security officials, she nonetheless outlines his reliance on unaccountable Russian money, and lack of principles in working with criminals. According to Belton, Trump was surrounded by Russian organized crime associates since the late 1980s. His commercial real estate interests and casinos provided money laundering options for Russian money, and helped save him from bankruptcy. Unlike US banking laws, real estate was exempt from the requirement to report suspicious activity. Lack of principles and easy money provided ample opportunities for corruption and compromise.

Putin’s People is must reading for anyone trying to understand Putin and the challenge of dealing with modern Russia. It destroys the still lingering view that Russia is interested in a reset, or integrating with the west. Efforts to co-opt or appease Putin are ineffectual and self-defeating. Western business interests that accept Russia’s appearance of legitimacy – courts, banks, commercial law – will only find themselves abetting corruption and undermining their principles. More importantly, while Kremlin Inc. has made Putin powerful and rich, it threatens Russia’s ability to transition power or develop a modern economy, making it a destabilizing force for years to come.

The Author is Putin's People