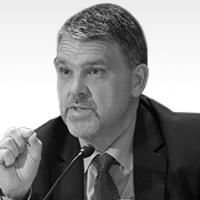 Nicholas “Nick” Rasmussen currently serves as Senior Director for Counterterrorism Programs at the McCain Institute for International Leadership in Washington, D.C. and as Distinguished Professor of Practice at the Sandra Day O’Connor College of Law at Arizona State University (ASU). Rasmussen joined the McCain Institute and ASU on May 21, 2018 after having stepped down as Director of the National Counterterrorism Center (NCTC) on December 23, 2017. He is also currently serving as an intelligence and national security analyst/contributor with NBC news and MSNBC.

Rasmussen is a senior national security professional with over twenty-seven years in U.S. government service, including in senior counterterrorism posts at the White House and in the U.S. Intelligence Community from 2001 to 2017. With a unique blend of experience as a senior policy executive and intelligence official, Rasmussen capped his federal government career as Director of NCTC, where he led more than 1,000 professionals from across the Intelligence Community, federal government, and federal contractor workforce. Rasmussen served in senior posts across three White House administrations, serving on the National Security Council (NSC) staff under Presidents Bush and Obama before being appointed Director of NCTC by President Obama and continuing his tenure at the request of President Trump’s administration in 2017. Rasmussen was one of only a handful of presidentially appointed officials held over from the Obama Administration to serve in the Trump Administration.

In 2014, Rasmussen was nominated by President Obama and confirmed by the U.S. Senate to serve as the fifth Director of NCTC. NCTC was created by Congress in response to the September 11, 2001 attacks to serve as the primary organization in the U.S. government for analysis and integration of all terrorism intelligence. As Director of NCTC, Rasmussen provided independent assessments on counterterrorism issues to the President and National Security Council, led and integrated the counterterrorism community on behalf of the Director of National Intelligence, and conducted strategic operational planning of U.S. counterterrorism activities in support of the President. He regularly testified before committees of the United States Congress in both open and closed session.

During his tenure, Rasmussen prioritized deepening the Center’s intelligence analysis to support the U.S. government’s campaign against ISIS and expanding NCTC’s reach with federal, state, and local partners as well as the private sector and foreign allies. Prior to becoming Director, Rasmussen served as NCTC’s Deputy Director from 2012 to 2014.

Rasmussen joined the counterterrorism community six days after the 9/11 attacks, serving as the Director of Regional Affairs in the Office of Combating Terrorism on President George W. Bush’s NSC staff from 2001 to 2004. Rasmussen rejoined the Bush Administration NSC in 2007 and continued his NSC service into President Obama’s administration to serve as the Special Assistant to the President and Senior Director for Counterterrorism. In this role, Rasmussen was charged with leading the development of U.S. counterterrorism policy and strategy, including supporting policy deliberations leading up to the U.S. military raid against Usama bin Laden.

During his nearly eight years of service across two administrations at the White House and his nearly six years as both the Deputy Director and Director of NCTC, Rasmussen was a key participant in national security decision making on a wide range of issues, to include policy on Afghanistan and Pakistan, the Middle East, North and East Africa, Southeast Asia, as well as on issues impacting our Homeland Security capabilities.

Rasmussen began his career at the Department of State in 1991 as a Presidential Management Intern and served at State for more than a decade in a variety of key positions. As Special Assistant to the State Department’s Middle East Coordinator, Ambassador Dennis Ross, from 1996-2001, Rasmussen was intimately involved in the Department’s work on the Arab-Israeli peace process. Prior to that, he served as Special Assistant to Ambassador-at-Large Robert Gallucci supporting the negotiation and implementation of the U.S.-North Korea Agreed Framework.

Rasmussen has regularly provided expert analysis on terrorism and national security issues for major media outlets, including The New York Times, The Washington Post, Time Magazine, CNN, Fox News, PBS and National Public Radio. He previously served as a fellow at the Council on Foreign Relations and as an adjunct faculty member at Georgetown University’s School of Foreign Service, where he taught a course on U.S. counterterrorism policy. He and his wife Maria reside in Alexandria, Virginia.

4 Terrorism Questions for former NCTC Director Nicholas Rasmussen
February 1, 2019January 31, 2019
This week’s release of the Intelligence Community’s unclassified Worldwide Threat Assessment made clear which groups the IC believes pose the greatest terrorist threats to the U.S. in 2019. The...
A Snapshot Look at Cyber Threats
September 24, 2018September 23, 2018
The Cipher Brief spoke with Nick Rasmussen, the former Director of the National Counterterrorism Center (NCTC) about the current cyber threat environment ranging from terrorism to nation state...