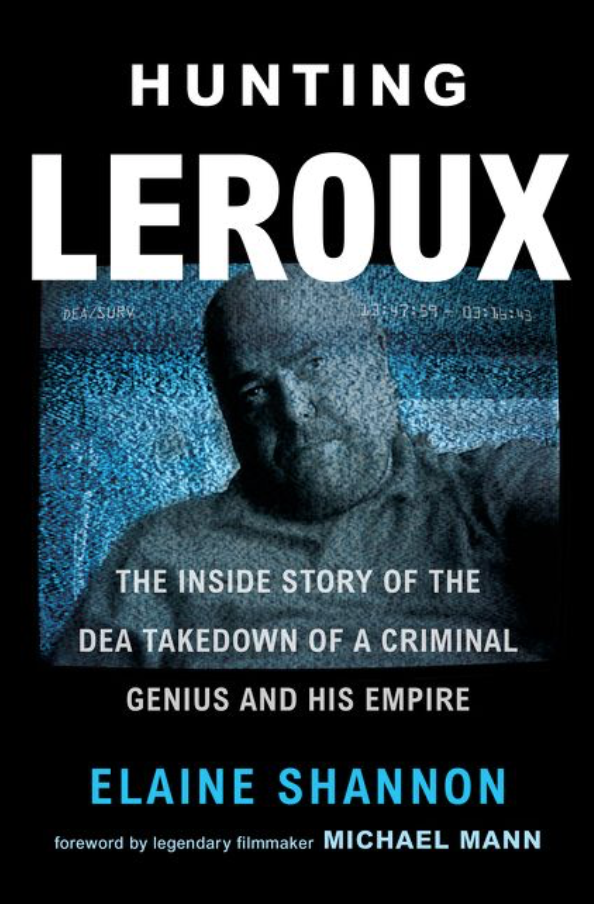 BOOK REVIEW: HUNTING LEROUX: The Inside Story of the DEA Takedown of a Criminal Genius

Reviewed by Joseph Augustyn, former Chief of Staff for CIA’s Director of Operations

Paul Calder LeRoux was a genius.  He was a diabolical genius.  He was also a computer genius. And he revolutionized transnational organized crime, bringing it into the 21st century.   Born in Zimbabwe in 1972 and raised in South Africa, LeRoux used his exceptional computer skills, entrepreneurial spirit and superior intellect…combined with an absence of conscience…to create a multifaceted drug and illegal arms transshipment cartel, the likes of which has rarely been seen.

Elaine Shannon, a veteran investigative journalist specializing in national security and organized crime and terrorism, brings LeRoux’s rise and his eventual downfall to life in Hunting LeRoux.  Detailing his transition from a simple computer programmer to one of the world’s most wanted kingpins, Shannon paints a portrait of a man possessed by an insatiable need for power and money, and an uncontrollable and vindictive desire to challenge anyone daring to get in his way.

But this is also a story about the Drug Enforcement Administration (DEA), and specifically two of its top agents, who worked creatively and tirelessly all over the world to bring LeRoux to justice.  As part of DEA’s elite 960 Group, agents Tom Cindric and Eric Stouch used every tool in their operational arsenal, including false identities, informants, and their powers of persuasion and imagination to eventually bring LeRoux to his knees. They risked their lives for the mission, and Shannon makes Hunting LeRoux their story as much as his.

Shannon’s grasp of the murky world of international organized crime and the intricate workings of law enforcement is impressive and undeniable.  Having spent over five years investigating the LeRoux dynasty and its take-down, she devoted thousands of hours in interviews with firsthand witnesses, studied scores of detailed government documents, diaries, emails, photos, transcripts and text messages to provide the reader with an “I am there” feeling throughout the book.  Her only self-admitted shortcoming was the failure to interview LeRoux himself, something DEA has not yet permitted, despite her repeated requests to do so.

The first half of her book focuses on LeRoux, his background, humble beginnings, and rise to power.  Shannon minces no words in describing him as a narcissist and egomaniac. Vindictive and manipulative, LeRoux is portrayed as a man without conscience and someone with no qualms in hiring mercenaries to kill anyone who crossed him.  While he “worshipped no God, but money,” Shannon describes LeRoux as simple in taste, as someone preferring a Big Mac and Diet Coke to lavish dinners and luxurious apartments.  Nonetheless, Shannon also respects LeRoux as a computer genius with a “dazzling intellect,” who operated in cyberspace and the dark web to amass one of the greatest fortunes in modern-day history.

LeRoux’s first fortune came from selling pharmaceuticals on the internet…cheap, available and legal..  But the more money he made, the more he thought he needed.  The more he stretched his imagination, the more he bumped up against legality and honest business.  His reach would eventually stretch from Southeast Asia to the Middle East, and Africa to Brazil.  The sale of legal pharmaceuticals manufactured in the Philippines, morphed into the sale of Colombian cocaine, North Korean meth, advanced weapons systems, and even Iranian sanction busting.  He managed his empire with virtually no infrastructure, preferring to manipulate the dark web and cyberspace alone.  Through clever and sophisticated cutouts and mercenaries, he eliminated his enemies at will, leaving no one to obstruct his insatiable appetite for wealth.

In the second half of the book, Shannon describes in great detail how and why the DEA first focused on LeRoux in 2009, and how it slowly, meticulously and cleverly began to unscramble and dismantle his cartel, primarily through the efforts of agents Cindric and Stouch.  She describes their personal sacrifice as they spent months away from home in Southeast Asia and West Africa, along the way bumping up against LeRoux’s cast of nefarious allies including Chinese Triads, Somali warlords and Serbian mafia gunrunners, to name a few.  Shannon describes the agent’s complicated use of informants, and their frustrations with their own slow-moving bureaucracy. Throughout, she is constant in her praise of the agents’ commitment, camaraderie, and skill in running one of DEA’s most complex undercover operations to date.  In the end, DEA got its man, cleverly luring LeRoux to Monrovia, where he was arrested in September 2012 with the help of Liberian Government security and taken into custody on charges of conspiracy to distribute 100 kilograms of meth from North Korea through the Chinese Triads.

Shannon is a pro.  She is detailed almost to extreme, and her work comes close to being a psychological study of the criminal mind and of the minds of those in law enforcement who fight to counter injustice. Hunting LeRoux is a valuable addition to the study of the anatomy of international organized crime, the drug cartels, and those who stretch the limits of decency and morality. She does this while also demonstrating a profound respect for law enforcement and the everyday challenges and risks its officers endure to keep us all safe. As such, Hunting LeRoux is highly recommended reading, especially for those with an interest in the complex and sometimes twisted world of criminal justice.

Hunting LeRoux earns a rating of 3.5 out of 4 trench coats.

Joseph W. Augustyn retired from the CIA in 2004 after spending 28 years as a member of the Agency’s clandestine service. Mr. Augustyn served as a Case Officer to include Chief of Station on three occasions while assigned to the National Resources, Near East and East Asia Divisions. Mr. Augustyn was also Deputy Chief of East Asia Division with responsibility for overseeing operational activities throughout the Far East. In addition, he served as Chief of Staff for the Deputy Director for Operations where he monitored and helped manage the CIA’s Covert Action programs.

The Author is Hunting Leroux

One Reply to “The DEA Takedown of a Criminal Genius”