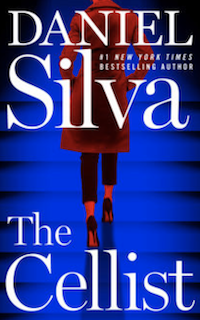 The Reviewer – Cipher Brief Expert Admiral James Stavridis, USN, Ret. was the 16th Supreme Allied Commander of NATO. He is currently Vice Chair, Global Affairs and Managing Director of The Carlyle Group and Chair of the Board of Trustees of the Rockefeller Foundation. He is the co-author of the New York Times best-seller, 2034: A Novel of the Next World War.

REVIEW — Settling into a new novel by Daniel Silva is always a joy, especially when it features the complicated Israeli master spy Gabriel Allon, and The Cellist is no exception.  This is the 21st volume in the Allon series and as always, the storyline seems ripped from the headlines – with unsettling central themes of the ongoing shadow war with Vladimir Putin’s Russia, cybersecurity breeches, civil unrest in the United States, and dirty money.

The novel opens with a killing, as many of Silva’s novels do, and we quickly learn that the victim is someone on Putin’s “death list,” Viktor Orlov.  At one time, among the wealthiest and most privileged of Russia oligarchs, Orlov escaped into the gilded trappings of London.  Unfortunately for him, he also raised the ire of the modern day “Czar of all the Russians,” and, as has too often been the case in real life, a poisoned dose of nerve agent is his reward for pushing back on the Russian regime’s excesses.  Despite his own elaborate security, we meet Orlov at the beginning of the story, a novel draped across his desk, foam drying on his gaping mouth, frozen in shock, and quite evidently dead.

Enter Gabriel Allon, who was part of the original Israeli hit squad that killed the Munich Olympic terrorists, and is a true renaissance individual who has known both tragedy and success in his long life.  Now in his early sixties, he is both a world renowned master of art restoration and head of Israel’s lethal Intelligence service, and he owes his life to Orlov.  Because of that, Allon becomes obsessed with finding out the truth about the killing and exacting his own kind of revenge.

As he launches his investigation, Allon discovers the footprints of the lethal “Haydn Group,” named after the classical composer Joseph Haydn, and their dangerous agenda for creating an incident in America that could utterly divide the nation – all in the midst of a global pandemic.  If it all sounds like something you would see on CNN, where Silva’s wife Jamie Gangel is a real-life reporter, you’re right.  The plot is far too frightfully plausible.  As Silva writes in the novel, the greatest weapon Russia has is money – after all, a nuclear weapon can be used but once, while money is the kind of lethal gift that keeps on giving.

What makes The Cellist so readable is not only the brisk pacing and sudden changes in venue, but more importantly, the depth of knowledge on display about art and music.  The cellist of the title is Isabel Brenner, a prodigy not only in music, but in mathematics and chess as well.  Following her graduate work in London, she is lured to a well-compensated position in “the world’s dirtiest bank,” the fictitious RhineBank AG, a large German financial institution.  RhineBank is the engine behind rogue states like Iran and Syria and is a huge money laundering enterprise in the employ of the hardly creatively named Russian “Laundromat.”

Brenner begins working with Allon to avenge the death of Orlov – in a very ingenious way that involves both music and art. Placing herself at significant risk, her inner resilience and courage eventually shine, as does her creative use of a Jimmy Choo stiletto is a pivotal moment late in the novel.  Set across Europe and ending in Washington, this is a story to be savored page by page.

From an intelligence perspective, The Cellist shows us that sometimes the best training for a spy is not duplicity or lethality (although those skill sets can’t hurt), but rather accounting.  This is a “follow the money” tale, and along the road we meet a wide variety of unsavory operatives, including some characters from previous Gabriel Allon novels.  They are woven together with the new cast seamlessly, including crooked Swiss financier Martin Landesmann – immersed in global private equity.

Given the timing of the release of the novel, Silva rewrote the story to weave in the shameful events of January 6, 2021.  Without giving away the plot, suffice to say the unhinged QAnon cabal, Russian interference, and dangerously disenfranchised Americans all play a role in an explosive incident in the U.S. capital.  As is so often the case, Gabriel Allon finds himself literally at the center of it.

The conclusion is satisfying on one hand, but on the other, this is the starkest of cautionary tales.  We must heal this nation or face the darkest of futures.  And the role Vladimir Putin wants to play in our destruction is a real and present danger.  Follow the money indeed.

The Cellist earns a prestigious four out of four trench coats.

The Author is The Cellist