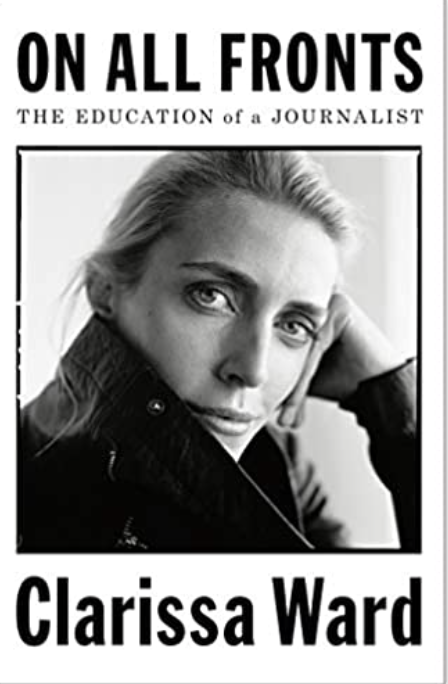 BOOK REVIEW: On All Fronts: The Education of a Journalist

REVIEW — Reading Clarissa Ward’s On All Fronts: The Education of a Journalist, her memoirs of a remarkable career as a conflict zone reporter, it was almost as if I was reviewing the life and experiences that many of us lived at CIA. I became thoroughly engrossed in the book, as I dedicated several hours each day and night over scotch and in front of a hot fire to dive into Ward’s narrative.

Ward’s story honors the quest for the truth and she conveys her experiences in a manner in which I identified to such a degree that I was compelled to put the book down and reflect on my own life. She describes war zones that became a blur; the loneliness of international travel; bearing witness to horrible human suffering, and what our fellow man can do to innocents while waging war. The unwashed clothes and smelling like you had not showered for weeks, and intense relationships with locals who you would one day leave behind as you returned to safety.  Fighting the bureaucracy of big organizations, whose executives back in the US ‘never got it,’ especially when pieces that you had written didn’t run or when you were bumped for bigger stories.  Was I reading about journalists or about grizzled CIA case officer? The answer was clear. It was both.

Ward begins her book with a description of her childhood, and I must admit that I was not enamored with her wealthy upbringing at British boarding schools.  Perhaps this is my own prejudice against wealth and power, as I was the son of a middle-class college professor at Rutgers University in New Jersey. Yet Ward admits she was quite lonely in her upbringing, and never glamorizes her childhood. Leaving home at age 10 for boarding school was a seemingly painful experience. Earning a degree from Yale, and the longing to do more after the September 11, 2001 attacks, led to her first job at Fox News. After serving as a producer for several years, her first real breakthrough in journalism was in Iraq, a place I frequented at the early stages of my career as well.

While I had already departed country when she arrived in 2005, I very much could feel the same sense of exhilaration, terror, and then ultimately, sadness as Ward witnessed the US bungle into what became a foreign policy debacle.

Ward’s description of Beirut is precisely as I remember it – one of the more tortured and dysfunctional countries in the Middle East. Partying at clubs at night, trying to uncover what Hizballah and the Israelis would do by day – she experienced precisely what many intelligence officers were also doing in the city. And her description of the Lebanese people is spot on. Living for the moment was their anthem. Despising their own government was par for the course. Addicted to fun, music, dancing, sex, and fine food, yet living day to day, as jobs were scarce, and tragedy always seemed around the corner. There is nary a CIA officer who left Beirut without a love for the people and their resilience; Ward no doubt believed the same. I could smell the fig trees basking in the Mediterranean sun as I was reading these chapters.

Ward describes Syria as a defining movement of her professional life-which mirrored so many CIA officers who have worked this issue. She candidly notes that in Aleppo, she was “scared out of her mind.”  She talked about seeing a psychiatrist upon her return, which I found to be an act of self-awareness that I wish more CIA officers would have embraced.  Ward never shied from speaking openly about her struggles when returning from war zones. But there was always the pull of needing to return. Ultimately, I found her description of her obsessive need to chase a conflict zone story due to the fear of being left behind, absolutely compelling, as it is ingrained deeply in so many CIA case officers as well, who have spent the last two decades fighting a never ending war.

Her description of Damascus during her first visit in 2005, brought back vivid memories. She writes beautifully of the Syrian people, the smells of the souk, and the historical sites she visited.  Most compelling to me during her subsequent trips, she notes her pure relief in crossing the border out of Syria.  There was total drain in one’s body in leaving the harsh police state; yet upon return, there was always the excitement when re-entering, given the incredible challenges of working inside such a repressive regime.

Of note, I did not like that as the Arab spring erupted, she in essence snuck in as a tourist, as she had no training on surveillance detection and thus could never in fact tell if she was free of government monitoring, as she seemed to believe.  I found her to be rather naive on this front, but also fearless given what she accomplished. Of note, once upon a time I, too, had made a quick trip into Damascus for simple language immersion, and I talked my way into the country even though I had an Israeli stamp on my passport. I could see Ward doing the exact same, as she had the moxy, bravery, and an indefatigable drive that allowed for her to find professional success in such a complicated country.

Her description of witnessing combat in Idlib, the death of a rebel, the wails of the relatives, and her personal fear – this was writing at its best.  And it resonated with me. An Arabic funeral is something to behold.  It is pure pain and suffering at its fullest, with female relatives never holding back their anguish. Ward nails this part of her narrative, offering vivid descriptions of the death and destruction in Syria.

Ward’s travels to Yemen while pregnant, were both terrifying and poignant.  The human suffering she witnessed in the port city of Aden was tragic. I’ve visited Aden and also walked the souq in Sanaa on several occasions, and what has happened to this fascinating country will go down in history as a grotesque abrogation of duty of American foreign policy.

Ward’s trip highlighted the parallels between female journalists and CIA case officers. Her success in a male-dominated profession meant she had to put in more time than her male colleagues. She writes that she always had to volunteer for the most difficult assignments and make the most sacrifices. Her description of the despicable personal behavior towards her by Saif Gadhafi during a dinner party in Moscow will ring true to many female case officers. Regrettably, the playing field is not level in either profession.

Ward describes life in Mazaar-i-Sharif, Afghanistan, as she interacts with a group of women who were trying to make the best of their lives under the oppressive rule of the Taliban. This was beautiful writing once again, as she bonded with the women and marveled at their toughness and bravery.

This brought me right back to my experiences in Afghanistan.  It reminded me of a similar interaction I had in Qandahar in early 2002.  We had found the relatives of an agent who had been killed early in the U.S. invasion, and thus I went to provide a payment to the wife. Yet I was never allowed to look her in the eye, and only passed payment through a male relative. I spoke to the wife indirectly, through a curtain in a dingy house made of mud walls, knowing full well she would likely never see a penny of the money as it would be handled by male relatives.

Having myself retired in July of 2019 and then embarking on a career as an author and commentator in the media on foreign policy and intelligence matters, I have been fortunate to meet, and in many cases, befriend journalists. Sitting at my beloved Vienna Inn, the quintessential dive bar in northern Virginia and a favorite CIA hangout for decades, I have dined on award-winning chili dogs while chatting with national security reporters. What have I learned from media professionals and why have I enjoyed my interactions with them, while so many in my former profession unfortunately distrust them?

It’s easy. The lives of CIA case officers and journalists have so many commonalities that I find at times it is almost impossible to distinguish between the two professions. We share a dedication to the truth; an adherence to the sacred ideal of protecting those with whom we speak.  And perhaps a most noble aversion to authority.  Journalists and CIA case officers tell the story of the world. They write what Margaret Atwood once perfectly termed “the literature of witness.”  And they rely on real people-agents and sources respectively- to help them do so. The audiences may be different, but the desire to tell a story full of truth, accuracy, and integrity remains a cornerstone of both professions.

On All Fronts earns a prestigious four out of four trench coats, as Ward has painted a masterpiece that will have great appeal to the national security set.

The Author is On All Fronts