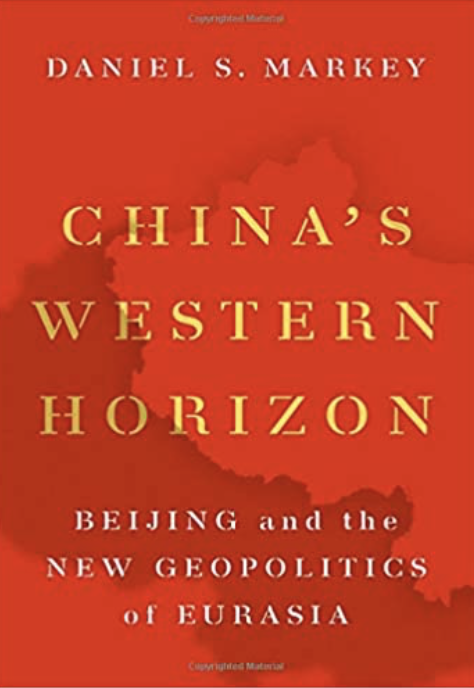 Cipher Brief Expert Ambassador Joseph DeTrani is former Special envoy for Six Party Talks with North Korea as well as former CIA director of East Asia Operations. He also served as a Special Adviser to the Director of National Intelligence and spent more than two decades with the Central Intelligence Agency as a member of the Senior Intelligence Service.

REVIEW — Daniel S. Markey, a professor at Johns Hopkins University’s School of Advanced International Studies and a South Asia expert who previously worked at the Council on Foreign Relations and the US Department of State, has written a fascinating and in depth study of China’s historical and current relationship with South Asia, Central Asia and the Middle East. In China’s Western Horizon: Beijing and the New Geopolitics of Eurasia, he contextualizes China’s economic and geopolitical initiatives with Pakistan, Kazakhstan and Iran, with insightful commentary on India, Saudi Arabia and Russia – all emblematic of China’s goal of greater regional and global leadership.  An assertive President Xi Jinping is leading this charge, impatient with Chairman Deng Xiaoping’s 1990 dictum to “…hide our capacities and bide our time; be good at maintaining a low profile; and never claim leadership.”

The Belt and Road Initiative (BRI) is China’s new land, maritime, polar and digital Silk Road Economic Belt that comprises a region of 4.4 billion people and one-third of the world’s GDP.  Mr. Markey provides valuable commentary on the myriad of entities China established to ensure the success of BRI: The Asia Infrastructure Investment Bank, Export-Import Bank of China, the China Development Bank and the foreign aid- focused China International Development Cooperation Agency.  These and other government entities are part of China’s “economic statecraft”, issuing loans and grants for infrastructure projects while permitting Beijing to exert economic pressure, when necessary, on countries China is not happy with, as they did with South Korea when China was upset when Seoul installed the THAAD (Terminal High Altitude Area Defense) missile defense system, or when China decided to suspend shipment of “rare earth” minerals to Japan. This type of government control, when politically necessary, apparently contributed to the U.S. decision to view China’s Huawei technologies Group as a security threat, banning it from doing business in the U.S.

Mr. Markey provides rich historical perspective on China’s trade – spices, porcelain, textiles and tea — with Central and South Asia during the Han and Tang Dynasties, with commentary on the Ming Dynasty’s (1368 to 1644 AD) Admiral Zhang He, whose fleet established China as the “hegemonic power over much of the Indian Ocean world.”  Eventually, a weak emperor disbanded the fleet, which was the beginning of the end of the Ming, the last Han dynasty in China, replaced in 1636 by the Manchu’s who established the Qing Dynasty, which ended in 1912 with the establishment of the Republic of China.  It was during the Qing that China experienced a series of “unequal treaties” imposed on China by Western powers, Russia and Japan, from 1840-1950 – the “century of humiliation”.

In South Asia, China maintains good trade and commercial relations with India and Pakistan, both members of the Shanghai Cooperation Organization. However, China’s strategic partnership with Pakistan is a unique relationship that benefits Islamabad economically and geopolitically (with India), while also providing China with security assurances from Pakistan that addresses China’s concern about Uighur opposition groups in Xinjiang that may seek refuge in Pakistan and Afghanistan. Initiatives like the China-Pakistan Economic Corridor (CPEC) were established to improve transportation for the enhancement of trade and commerce.   Anecdotes like China’s royal treatment in places like the Lahore Airport, with a “Chinese security desk”, with Pakistan security, to help Chinese visitors, that number up to 70,000 Chinese workers in Pakistan at any one time, captures this special relationship.  Indeed, no other country, to include the U.S., gets this treatment.

The section of the book that deals with Central Asia was particularly instructive, noting that China’s trade with Central Asia goes back at least three thousand years.  However, “China’s involvement with Kazakhstan and the rest of Central Asia is expanding rapidly.  As in Pakistan and South Asia, China is injecting itself into challenging national political economies and complicated set of deeply rooted geopolitical relationships…China’s intensified presence in Central Asia is likely to prove politically contentious…eventually Russia will awaken to the cruel consequences of China’s regional preeminence, although by then there may be little Moscow can do to respond. ” Given that Kazakhstan, and the four other stans – Kyrgyzstan, Tajikistan, Turkmenistan and Uzbekistan – are former Soviet republics, it’s logical to assume Moscow has to be concerned about losing its influence with Kazakhstan.  This is not too dissimilar to what’s happening in Siberia, with an uptick in Chinese investment and migration to the densely populated region.  Kazakhstan’s oil and gas reserves and its partnership with China National Petroleum Corporation (CNPC) provides China with an important source of energy, while 40% of Kazakhstan’s foreign trade is with Xinjiang Province.  Given this trend, some in Russia are concerned about Putin’s ability to reassert control over the whole of Central Asia.

China’s economic and geopolitical focus on the Middle East is clearly presented in this excellent book.  China’s relationship with Iran goes back over 2000 years to the Han and Tang dynasties.  Over 50% of China’s oil comes from the Middle East, primarily from Iran and Saudi Arabia, but also from Egypt, Turkey, Iraq, the Gulf States and others.  China as early as 1986 provided Iran with Silkworm anti-ship cruise missile, while also helping with Iran’s nascent nuclear program.  China’s Huawei and ZTE (Zhongxing Telecommunications Equipment Corporation) provides Iran with significant telecommunication capabilities.  China and Saudi Arabia established diplomatic relations in 1990, immediately after China provided Riyadh with CSS-2 IRBMs, followed by the provision of CSS-5 missiles in 2007. “China is in many ways an ideal partner for the Saudis, who (like Iran’s conservatives) have taken to touting the ‘China model’ as a means to achieve economic and governance reforms without the messiness of political liberalization.”  And for Iran: “After his May 2014 meeting with Xi Jinping in Shanghai, Iranian president Hassan Rouhani publicly praised China’s plans for a ‘revival of the Silk Road.’”

I found the concluding section of the book, dealing with US-China Competition in Eurasia, timely and compelling.  As Mr. Markey states: “…to anticipate the political consequences of China’s overseas activities in any particular instance, we must appreciate the other state’s preexisting domestic conditions and geopolitical relationships.  Knowing what China wants, or even what China is attempting to do, is an essential starting point, but an insufficient one.”  And “…the intersection of economic, political, and military developments because actions in one policy domain will often have consequences, intended or not, for the others.”  It’s clearly stated, and supported with this meticulously researched book, that China, with Xi Jinping in command, will not be satisfied until China achieves a dominant global role, eventually displacing the U.S. and Russia.  But the author cautions, however, that “We should not underestimate the extent to which even Xi’s China remains relatively conflict-averse and conservative, reluctant to throw itself into potentially costly situations, and in numerous cases still willing to accept a silent, junior-partner role as long as China’s core interests are protected.”  China’s focus on diplomacy and using its economic tools of statecraft, like the Asian Infrastructure Investment Bank, to enhance its global leadership stature represents a significant challenge to the U.S. and issues related to its relationship with traditional allies and partners. China’s willingness to participate in military exercises with Russia and other countries, with the establishment of a new military base in Djibouti, may presage a willingness to establish additional military bases or “dual use facilities” in other countries, for economic, geopolitical and military advantage.

The bottom line, however, is that although China’s economic and commercial activities in Eurasia pose “relatively little threat to American interests in the region”, the U.S. will see its economic interests suffer, with a “less level playing field for US firms.” And China’s “access to Eurasia’s resources, markets, and ports could transform China from an East Asian power to a global superpower.”  Mr. Markey correctly, in my views, cautions that the U.S. is not in a cold war with China, as was the case with Russia, citing the hard power and diplomatic influence the U.S. has and  US-China economic interdependence, with the numerous challenges China has domestically, with contending forces and divisions within the state and society.

The Trump and previous administrations continue to focus on its relationship with allies and partners in the Indo-Pacific region, while maintaining the trans-Atlantic NATO alliance.  But the focus clearly is the Indo-Pacific region to build “a networked security architecture capable of deterring aggression, maintaining stability, and ensuring free access to common domains.”  It’s China that concerns the U.S. – and others – in the Indo-Pacific region.  Mr. Markey makes the case that the U.S. does not have these concerns in China’s west (continental Eurasia), which, citing his sources, say “…it’s a messy region, full of geopolitical contests.”

The section of the book dealing with strategic options for the United States in continental Eurasia should be required reading for anyone interested in US-China relations.  It’s a succinct and insightful summation of options: Strategic Withdrawal or benign neglect so as to not spread the U.S. too thin over distant and less essential territories; Peaceful Accommodation, to work constructively in this region with China; Critical Publicity, to expose harmful Chinese activities while highlighting US values; Selective Competition, to outdo some of China’s economic initiatives, while providing viable alternatives for infrastructure financing, to prevent states from being susceptible to Chinese economic coercion.

Personally, Selective Competition appeals to me, given the long history of U.S. global leadership and the generosity and humanity of the American people in its pursuit of peace and prosperity for all people.  Illiberal states will find it difficult, if not impossible, to compete with a U.S. that espouses these values, while caring for and nurturing its allies and partners and all people who seek life, liberty and the pursuit of happiness.

This is such a timely and important book, with over 100 pages of footnotes and invaluable insights.  It concludes with a recommendation that “…the U.S. should select carefully its theaters of competition, remain open to the possibility of at least tactical cooperation with Beijing, pursue lower-cost initiatives likely to win local partners and drive wedges among adversaries, and invest in the capacity to compete militarily over the long haul if necessary.” And most compelling for me, Mr. Markey concludes his excellent book with a suggestion for US policymakers: “A clear grasp of local histories, interests, and relationships will be essential to advance America’s specific diplomatic, economic, and security interests in Eurasia, whether in common cause with Beijing or when working at cross purposes. Likewise, that fine-grained appreciation for the Eurasian theater will prove invaluable in the global geopolitical competition with China that now looms in America’s future.”  This is an outstanding book; I recommend it highly.

The Author is China's Western Horizon