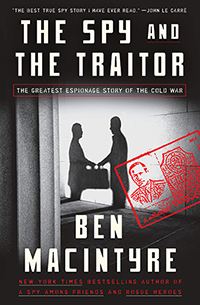 The Spy and the Traitor: The Greatest Espionage Story of the Cold War by Ben MacIntyre

THE SPY AND THE TRAITOR: THE GREATEST ESPIONAGE STORY OF THE COLD WAR by Ben MacIntyre, Crown, New York, 2018

What most experienced intelligence officers will tell you is that defector stories rarely end well.  Such is the case of one of the UK’s most important and heralded spies of the 20th century.  Ben MacIntyre, a writer-at-large for The Times of London, has written a masterful and thoroughly readable story of Oleg Gordievsky, a man who by all accounts, had it all.  Gordievsky grew up in a family of KGB officers, attended the best schools the Soviet Union had to offer, was a gifted athlete, had a sharp and inquiring mind, and had a career path into the Soviet intelligence apparatus that promised a life of privilege and prestige. The problem was Gordievsky was also an idealist, a sponge when it came to Western classical music and the arts, Western literature, and Western political thinking and philosophy.

MacIntyre takes us through Gordievsky’s political and social maturation process in great and colorful detail, painting a picture of a young man of privilege who slowly and skillfully worked his way up the KGB bureaucracy, which the author describes as bloated, inefficient and, at times, downright incompetent.  We follow Gordievsky’s progress as he moves from a boring KGB headquarters assignment doing administrative work for Soviet illegals, to his first posting in Copenhagen in 1966, where he is exposed first hand to the freedoms, culture and lifestyle that will become the basis for his treachery against the USSR.  Assigned back to Moscow following that tour, MacIntyre details Gordievsky’s clever and manipulative strategy that eventually gets him reassigned back to Denmark in 1972.  It is here and at this time that he is recruited by MI6 and begins his decade long career as the most important and significant spy in MI6 and British history.

McIntyre is meticulous in his detail describing the tradecraft and atmospherics surrounding Gordievsky’s eventual rise to the plum position of Soviet rezidentura in London, being careful along the way to describe the patience, foresight, skill and operational planning MI6 exhibited while running Gordievsky, and keeping his identity and access compartmented even from the UK’s most important allies, including the United States, and specifically the CIA. Over the course of ten years, Gordievsky will pass to MI6 hundreds of sensitive documents detailing KGB espionage activities not only in the UK, but throughout Europe, and will provide intelligence on Soviet strategy and plans regarding possible nuclear engagement and the political thinking and machinations in the Soviet bureaucracy at the highest levels.  His intelligence will be read not only in MI6, but also on an almost daily basis by Prime Minister Margaret Thatcher (who was not told his name). McIntyre credits Gordievsky for preparing and building the foundational strategy used by PM Thatcher to deal with Mikhail Gorbachev, contributing eventually, he argues, to the dissolution of the Soviet Union itself in 1991. Later in his life, Gordievsky will meet with CIA Director Bill Casey and President Ronald Reagan, both of whom will lavish Gordievsky with praise for his courage, perseverance, and contribution to international security.

McIntyre describes MI6 in laudatory terms throughout regarding its handling and concern for Gordievsky’s well-being and safety and provides a fascinating and detailed description of MI6’s exfiltration plan for him, called PIMLICO, which was carried out by British diplomats and MI6 officers in the summer of 1985 amidst an exciting race to Finland’s border with Gordievsky in the trunk of one of a car.

So, what went wrong? Why did Gordievsky’s reign as the most influential MI6 spy of all time come to a sudden end?  The answer lies in the unknown abyss of the intelligence world.  Despite the exceptional tradecraft practiced without flaw by MI6, and the impeccable attention to operational detail, Gordievsky’s fate, like the fate of countless other careful and skillful spies over the years, was sealed by yet another spy and traitor.  Aldrich Ames, the chief of counterintelligence in CIA’s Soviet division, eager for revenge against his superiors who, in his mind, did not recognize his talents, and eager to accumulate enough wealth to keep his demanding wife happy, betrayed the UK’s most important asset, along with dozens of other recruited Russian agents, many of whom were over time, summarily executed.

Today, Gordievsky lives a relatively quiet life in a small but comfortable house in a suburb of London. His care and feeding is provided by MI6, and he is kept busy by lecturing occasionally at MI6 and MI5 training classes.  He is, however, alone and lonely.  Given the complexity of his exfiltration plan (PIMLICO), he was unable to bring his wife and two young daughters with him.  In Russia, his wife and daughters were subjected to harassment, ostracism and intense scrutiny for Gordievsky’s actions.  None of them knew of his work for British intelligence, which he kept from them as his sacred secret.  It took six years of serious negotiations for the British government, including several pleas to Gorbachev from Prime Minister Margaret Thatcher herself, to finally get the Russians to relent and agree to allow his family to reunite in the UK.  Not surprisingly, the passage of time had soured what was once a loving and happy family dynamic. Gordievsky’s wife remained bitter, and rightfully blamed her husband for keeping her in the dark over the years, and for subsequently subjecting her to constant Russian harassment after his escape.  His young daughters hardly knew him when they were reunited with their father. They would eventually return to Russia, leaving Gordievsky alone and remorseful.

In March 2018, former GRU officer turned British spy, Sergei Skripal and his daughter Yulia, were poisoned in Salisbury, England by a Russian nerve agent. The assassination attempt was blatantly perpetrated by two GRU officers, most likely with the direct approval of Vladimir Putin.  Gordievsky who, years ago, was sentenced to death in absentia in Russia for his betrayal, now undoubtedly lives under the constant threat of retaliation…a price he pays for once being MI6’s preeminent spy.

The Spy and the Traitor earns a prestigious four trench coats.

Joseph W. Augustyn is a 28-year veteran of the CIA’s Directorate of Operations, and once served as the Director the CIA’s defector resettlement center.

The Author is The Spy and the Traitor: The Greatest Espionage Story of the Cold War by Ben MacIntyre