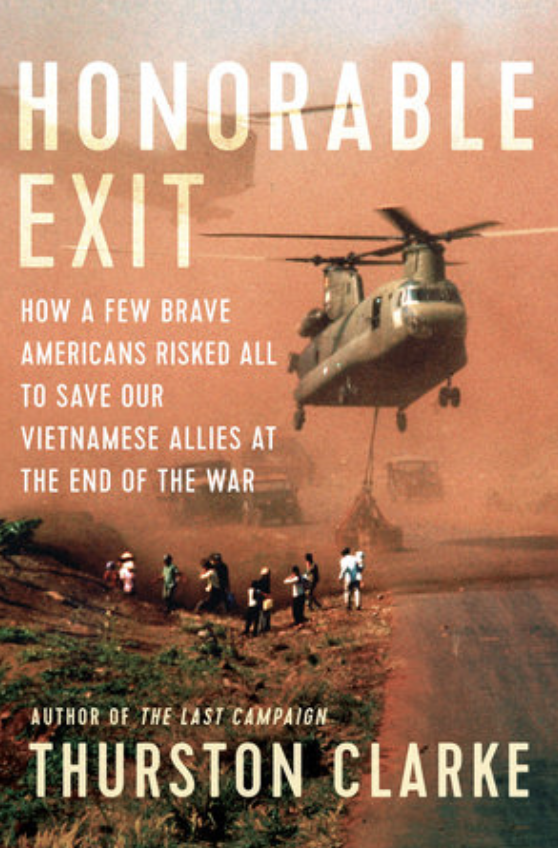 BOOK REVIEW: Honorable Exit: How A Few Brave Americans Risked All to Save Our Vietnamese Allies at the End of the War

Most observers would probably say that the United States’ involvement in the Vietnam war ended in an unmitigated disaster. Thurston Clarke’s Honorable Exit, however, argues that the chaotic evacuation was a mitigated disaster – something that could have been much worse if it weren’t for the actions of a handful of courageous Americans.

The photo of fleeing civilians climbing a narrow ladder to board an Air America helicopter precariously perched on a rooftop in Saigon, is one of the most iconic images of the last fifty years.  Conventional wisdom suggests that the picture is a metaphor for failed policies that ended in shame.  But Clarke argues, and demonstrates in considerable detail, that a handful of Americans refused to cut and run – but instead put their own lives (and sometimes those of their families) at risk to try to save tens of thousands of their Vietnamese allies.  The book tackles how the largely unsung heroes fought to save Vietnamese, whose close association with U.S. personnel put them at enormous risk from the soon-to-be-victorious forces from the North.

Published on April 30th, the 44th anniversary of the fall of Saigon, Honorable Exit is an impressive and depressing work of history. Before the book’s first page is a list of 37 principal characters whose actions are featured in the pages that follow.  With a few exceptions, the higher an individual’s standing on the leadership ladder – the worst he or she looks through the lens of history.

But the heroes in the book – and there are many – tend to be lower-level people who ignored the orders of their superiors in efforts to bring an honorable end to a debilitating conflict.

The reasons why senior officials failed to plan an effective exit from Vietnam are numerous.  Clarke says that many fell victim to “groupthink” – where they couldn’t wrap their minds around the fact that the U.S. involvement in Vietnam was about to come to a sudden and unhappy end. Illustrating the point, he says, the CIA station chief, Thomas Polgar, told his two civilian secretaries on April 25th that they would all be in Vietnam for at least six more months. Within five days, they were all on their way home. Secretary of State Henry Kissinger told reporters that on April 29th the morning before the evacuation – that he thought it “highly probable” that the war would end with a cease fire and a negotiated settlement.

The most enigmatic character in the book is U.S. Ambassador Graham Martin. Having invested enormous personal effort in U.S. -South Vietnamese relations – and having lost a son in the war, Martin, at times, gave the impression that he was in denial about the war’s denouement. One person quoted in the book described Martin’s penchant for twisting positions by calling him “a man who could stand in the shadow of a corkscrew.”  And yet, Clarke seems to have more than a little sympathy for the ambassador – in part, perhaps, because of the difficult guidance he received from Washington (and particularly from Kissinger) and in part, because while Martin appeared to be saying things that were untrue and taking actions that proved unhelpful, he did so to try and forestall panic as well as an early and disastrous conclusion to the American presence in Vietnam.

The unwillingness or inability of senior officials to accurately describe the dire nature of the situation was only part of the problem.  U.S. government agencies were reluctant to come up with realistic evacuation scenarios and there was great internal debate about how many Vietnamese citizens should be included in the withdrawal plans. Many of the local nationals had been close working partners with the Americans – an association which marked them for imprisonment or execution following a takeover by the north.  It is noteworthy that in the decades that followed, Vietnamese-Americans have been one of the most successful émigré groups to come to the U.S.

U.S. officials who organized and facilitated disparate evacuation schemes were often forced to “play God” – deciding which individuals (and their extended families) were saved and which were left to face their fate alone.  Vietnamese nationals begged, bribed and occasionally brandished weapons to get to the head of the exit line.  Their concerns were not unwarranted.  Clarke writes that Secretary of Defense James Schlesinger had told Congress earlier in the month that as many as 200,000 Vietnamese might be killed by the Communists if the country fell.  The U.S. military’s Stars and Stripes newspaper, which was widely available in Vietnam, had a headline reading “At Least Million Vietnamese Will Be Slaughtered.” No wonder there was panic in the streets.

While some senior U.S. officials were in denial, there were others, both in and outside government, who clearly saw the writing on the wall. On numerous occasions, these people violated U.S. policy and broke Vietnamese law to help local citizens escape. For example, Al Topping, the Pan Am Airlines station manager, filled out paperwork to personally “adopt” 360 Vietnamese employees and their families to enable their escape. Army Specialist Bill Bell’s wife and child were among the 138 people killed in the crash of an Air Force C-5A Galaxy on April 4 to evacuate orphans (many Amerasian).  Bell took a surviving child home to the U.S. and then returned to Vietnam to assist in the final days of the evacuation. Richard Armitage, a former naval officer working for the Defense Attaché’s Office (who would later go on to become Deputy Secretary of State in the George W. Bush administration) executed a plan (which neither the South Vietnamese nor American government would have approved had he asked) to have many of the South Vietnamese Navy’s ships, crammed with sailors and their families, sail away to Subic Bay in the Philippines just before the Saigon fell.

While the tragic fall of Vietnam has been told in many places and in many ways, Honorable Exit, is perhaps the most exhaustive compilation of the stories of some of the key players on the ground.

I have only a couple minor nits to pick with the book.  One is that throughout the work the author relentlessly refers to “CIA agents” in Vietnam.  You would think that a distinguished historian would know to refer to them as “CIA officers” rather than “agents” a term that is very ‘Hollywood’, but sounds like fingernails on a chalkboard to those with an Agency past.   ‘Agents’ is a term used for spies who are recruited by CIA Officers.  ‘Officers’ are actual CIA employees.

My other (admittedly parochial) issue is that Clarke gives relatively short shrift to the seaborne portion of the evacuation.  While he mentions it to a limited extent – I found myself wishing that he had been as diligent in telling that end of the story as he was in recounting the land-based end of the operation.  Perhaps that is another book.

Honorable Exit earns a respectable 3.5 out of 4 trench coats.

Bill Harlow is The Cipher Brief’s book senior editor.  He is the former chief spokesman for the CIA.  A retired U.S. Navy captain, Harlow served aboard the aircraft carrier USS Midway during Operation Frequent Wind, the 1975 evacuation of Vietnam.  He is also co-author of George Tenet’s Center of the Storm: My Years at the CIA, and author of the novel, Circle William.

The Author is Honorable Exit