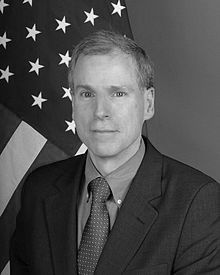 The Trump Administration last week announced it deployed hundreds of U.S. Marines and Army Rangers to Syria to support the campaign to take Raqqa, the Islamic State’s de facto capital in Syria, from the extremist terror group. The Cipher Brief’s Kaitlin Lavinder spoke with former U.S. Ambassador to Syria (2011-2014) Robert Ford about what this move signifies and what the future of U.S. involvement in Syria could look like. Ford is a fellow at the Middle East Institute in Washington and a teaching fellow at Yale University.

The Cipher Brief: Is this news that around 400 U.S. Marines and Army Rangers have been deployed to Syria to support the Raqqa campaign a significant change in U.S. strategy?

Ambassador Robert Ford: It’s a change because we’ve had forces providing combat support, that’s what the Special Operations guys were doing, but we haven’t had these kinds of direct military units to provide artillery support before. We have been providing support through our Special Operations to the Syrian Kurds and the Arab fighters aligned with them. So it’s not a gigantic change, but it’s a change.

I think a different question is what about this peacekeeping role they’re playing up in Manbij, that’s a much bigger change.

TCB: Can you expand on that – why is that such a huge change?

RF: The Pentagon has announced two things. They’ve deployed a Marine artillery unit, but then they’ve also sent Special Operations Forces up to the town of Manbij up in north central Syria, not too far from the Turkish border. And they’ve put them between the Turkish army, and its Syrian Arab militia allies, and the Syrian Democratic Forces, Kurdish and Arabs, who we’ve been supporting. Those two have been fighting each other pretty regularly for the last year. But this is the first time we’ve put U.S. troops in the middle of them to try to keep them apart.

And there were reports yesterday [March 9] and again today [March 10] that the Turks were shelling. The Syrian government has deployed forces up there too, and the Turks have been shelling. The Syrians yesterday announced over a dozen Syrian government soldiers were killed in the Turkish shelling. I don’t know if the Syrian government sources are to be trusted. Government lies about all kinds of things. But clearly there was some kind of shelling going on. So that’s new, and that’s putting our people real close to fighting. A peacekeeping role is not anything we’ve ever done before in Syria. We haven’t even done it in Iraq for that matter.

TCB: And what exactly does that signify? Does that signify that the new White House plan against ISIS is going to be made up of more forces in Syria?

TCB: From the Turkish perspective, it sounds like you’re saying there has been an uptick recently in its efforts to fight the Kurds as opposed to the Islamic State, or maybe they’re just not hiding those efforts as well. Is that accurate?

RF: I think the Turks, since they intervened last summer with their army, their priority has always been the Syrian Kurds, not the Islamic State. They intervened in Syria to prevent the Syrian Kurds that we were backing from setting up a contiguous autonomous zone from almost the Mediterranean Coast to the Iraqi border. So the Turks intervened and sort of split that in half and occupy a space blocking the physical continuity of that Kurdish zone. That’s always been their priority. That hasn’t changed.

The Obama Administration consistently blew off, ignored the Turkish concerns. Then the Trump people came in. The Turks had high hopes for the Trump Administration, that they were going to stop the support for the Syrian Kurds, but, so far, it doesn’t look like it’s happened.

RF: They can do that. It’s an executive decision, where you deploy the troops, unless the Congress insists on overruling the War Powers Act. I don’t think that Congress is going to get involved in this tactical operational issue.

It’s a different question as to whether or not the Americans – the military, the Pentagon – is ready to be patient and allow the Syrian forces that we’ve been supporting to take Raqqa. That would take longer. Sending in artillery, sending in other troops to help, that feeds the capture of Raqqa. So it’s just a question of how much patience the Americans have.

And the Trump Administration, throughout the campaign, said we’re not going to do nation-building. Well, guess what, we now are about to own eastern Syria. So who’s going to pay for it?

There was an article yesterday in the Wall Street Journal that said that some people in the White House think we should capture Raqqa and then turn it over to the Assad government. But it’s not clear to me that the locals are going to accept the Assad government. They rose up in revolt against Assad in 2011, kicked the Syrian government out of Raqqa. That’s before the Islamic State ever took it. For two years, it was controlled by the Free Syrian Army. The Assad government hasn’t even been able to retake all of Damascus. He doesn’t have enough forces to hold Raqqa, unless he brings in Shia militia from places like Iraq, Lebanon, and Afghanistan. That’s how he took Aleppo. So now he’s going to put these foreign Shia militias in the middle of a conservative Arab Sunni tribal region? That didn’t work out real well in Western Iraq. So these are all unanswered questions. If the administration has a plan, nobody outside of government has seen it yet.

TCB: What do you think a good, viable option would be for post-Raqqa?

That’s the cost we have of rushing into Raqqa. And if we want to go slow, then we have to accept that there’s going to be a heightened security risk to Europe and to North America. There’s no free ride in any of this.

RF: I have two. The first is that while the Syrian Kurds, in many cases, have been an effective force against the Islamic State – they’re brave fighters, nobody questions that – it’s important to remember that they are not from Raqqa, and their reputation among the local Arab community is quite bad. That reputation may be fair or unfair, but it’s a reality. The Americans can’t change that.

Second, in addition to difficult relations with local Arab communities, the Turks hate them. And so how close do we want to support these Syrian Kurds, given that they have enemies all around them? If we don’t want to get into a long-term conflict out there, then we need to think carefully about who we choose as allies.

TCB: Do you have confidence in the current U.S. Administration and the people working on these issues to deal with this sensitively and effectively?

RF: Yeah, I know General [Jim] Mattis [the U.S. Defense Secretary] from Iraq, when he was in Anbar. I met him during the combat in Ramadi, met him and talked to him quite a bit. Met him and talked to him in Fallujah. I know him quite well. And I have huge confidence. The fact that he’s in the Administration is one of the big pluses for the Administration.

And I know H. R. McMaster, the National Security Advisor, also from Iraq. I worked with him on a project for General [David] Petraeus [former Commanding General of Multi-National Force – Iraq] and Ryan Crocker [former U.S. Ambassador to Iraq] in 2007. These are really capable people. They’re very smart.

The problem they have is they don’t – especially the Pentagon – have complete teams yet. And until they have their teams in place, they’re really trying to fight a war with one arm tied behind their backs. The Pentagon has no Undersecretary or Assistant Secretary. The entire civilian side that needs to be negotiating with the Turks, with the Russians, with the Saudis – it’s the same as the State Department – those teams are not in place. When I wake up every day, the news I would like to see is the White House has named six people for deputy and undersecretary positions at State and the Pentagon. Haven’t woken up to such news yet.

TCB: Is it unusual that the teams are not in place at this point?

RF: Yea, we’re now in mid-March. We should have names before the Senate, and we don’t even have that.

So that’s what I mean about fighting a war with one armed tied behind your back. You’ve got to get the people in place.

The Author is Ambassador Robert Ford

Ambassador Robert Ford was the U.S. Ambassador to Syria from 2011-2014. He is currently a fellow at the Middle East Institute in Washington and a teaching fellow at Yale University.