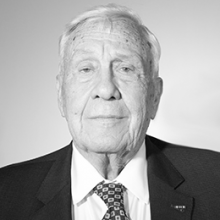 Charlie AllenFormer Under Secretary for Intelligence and Analysis, U.S. Department of Homeland Security

As we approach our fifth year of publishing expert national security insights, perspectives and analysis, we wanted to find a way to honor those who have served the country in multiple ways over the decades, whether in the public or private sectors, and across multiple administrations.  We can think of no one more deserving of our inaugural lifetime award than Charlie Allen.

Charlie has always seen the Intelligence Community as the first line of defense for national security and over the decades, he has pushed collections and operations to the edge in order to keep America safe.  He served for more than 40 years at the CIA and became principal adviser to the Director of Central Intelligence on collection management, where he revolutionized the way national intelligence agencies coordinate and target their activities. He later served as Under Secretary for Intelligence and Analysis at the Department of Homeland Security.

As we began to reach out to those in the Intelligence community who have worked with Charlie over the years, we realized the depth of his impact on US national security.  Former Director of Central Intelligence George J. Tenet told us, “More than a decade ago, I noted that there had been seventeen Directors of Central Intelligence and fifteen of us had the privilege of working for Charlie Allen. Since then, several Secretaries of Homeland Security and countless leaders in the private sector have similarly benefited from Charlie’s legendary work ethic and wisdom. There are few, if any people more responsible for the growth, development and success of American intelligence than Charlie Allen. He will always be one of my heroes. The Cipher Brief could not have found a more deserving recipient of their inaugural Lifetime National Security Award.”

Former Homeland Security Secretary Michael Chertoff told us, “Charlie Allen has dedicated his lifetime to securing our nation. Whether serving at the leadership of the CIA or heading intelligence at the Department of Homeland Security, he has been at the forefront of the critical task of assessing and warning about adversary threats. Charlie has brought his formidable experience and talents to bear during such historic episodes as the Cuban Missile Crisis, the Iraqi invasion of Kuwait, and the post 9/11 fight against al Qaeda.”

Charlie is a two-time recipient of the National Intelligence Distinguished Service Medal.

He now works in the private sector as a principal at The Chertoff Group and he remains closely tied to the national security community in multiple ways.  And even though he is no longer officially in government, he has answered the call from multiple administrations to continue to serve in various ways.  Another way Charlie is continuing to shape the next generation of national security leaders is through his one-on-one mentoring breakfasts, to those who have been lucky enough to get them over the years.

If Charlie has had a personal impact on you or your career, we invite you to share your story with us.  We will be collecting them and presenting them to Charlie as we present The Cipher Brief’s Lifetime National Security Award on Sunday, March 22rd at The Cipher Brief’s annual Threat Conference in Sea Island, Georgia. Among those there to help us honor him will be former U.S. Senator Saxby Chambliss and former CIA and NSA Director General Michael Hayden.

We hope you join us in sending your congratulations to Charlie, and we’d like to thank you for being a Cipher Brief reader.

Find out more about The Cipher Brief Threat Conference here.

The Author is Charlie Allen