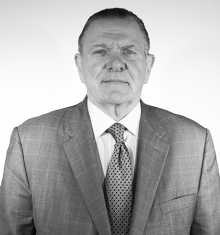 As President-elect Donald Trump assembles his national security team, The Cipher Brief met with one prospective nominee, General Jack Keane, former Vice Chief of Staff of the United States Army and member of The Cipher Brief’s network. He had just met with the Trump team when he sat down with The Cipher Brief’s Leone Lakhani to discuss his views on the transition and why he’s not going back to public service.

The Cipher Brief: You met the Trump transition team. What were your thoughts?

General Jack Keane: He and I have a couple of things in common. I’m a New York City kid, born and raised. We like the Yankees, and that’s not something to be taken lightly.

But then we got into talking about the national security challenges, foreign policy challenges, and defense issues that the country is facing and I was able to provide him with some thoughts. I found him to be very personable, quite engaging, an effective listener. He asked excellent questions. He and the four advisors who were with him knew very little about national security or foreign policy. That’s not surprising –nor did President Obama when he was elected, nor did George W. Bush, Clinton, or even Ronald Reagan for that matter.

TCB: There’s been a lot of debate over whether people who had differing views from Mr. Trump during the campaign should serve in his administration. What’s your view on that?  When the President calls, is it your duty to serve?

JK: I think if you can serve you should serve. But not everybody can, and I happen to be one of those. You know, I told him that I’m not able to go back into public service. That was a burden to have to tell him that but I felt strongly about that. I gave him an explanation as to why that is, and he was quite gracious and quite supportive of me in doing it. I’ll try to do everything I can to help him and his administration restore American leadership to the world. I just won’t be doing it as a full-time public servant again.

TCB: Was there any particular position you were discussing?

JK: I will leave that up to him but it’s been widely discussed; let’s put it that way.

TCB: But you are saying you are ruling out joining the Administration?

JK: Yes, yes I am, for personal reasons having nothing to do with the Administration. I would be delighted and honored to serve.

TCB: In terms of the national security threats, as you discussed, what do you think are the biggest threats facing the Trump Administration?

JK: The United States is facing global security challenges on a scale we have not seen since the end of World War II and the rise of the Soviet Union. Radical Islam has morphed into a global jihad, and it has not been abated at all; it’s expanding every month and every year. And the killing goes on.

Three revisionist powers – Russia, Iran, and China – are all seeking some form of regional domination, and all are succeeding to a varying degree. Cyberattack and cyber espionage is exploding against the United States, not just to gather intelligence but to gather intellectual property and technology. They’re robbing us blind, and it’s really unfortunate.

These are challenges that we’re facing, and because these challenges have been here for a while, many of our allies no longer have faith and trust in us. They don’t think we’re reliable because they believe we have disengaged from the world. Also, our adversaries are emboldened – that’s why they are as assertive and aggressive as they are, particularly the revisionist powers.

Radical Islamists are emboldened, and they are going be committed because they are ideologically driven. Regardless of whether we are engaged or not, we will always have them to contend with in terms of their determination. But other countries certainly see the United States as being in a vulnerable position, and they believe they can advantage themselves geopolitically, and they are certainly doing that.

TCB: Let’s break down some of those issues that you’re discussing. In terms of Russia for instance, during the campaign we heard Mr. Trump say he was very close to Putin. What was their position now that you have met the transition team?

JK: I think what will happen to the President-elect and his advisors, as they receive Presidential daily briefings – as they get in-depth analysis from our intelligence services about Russia, about Putin, or about any one of our adversarial relationships – they will acquire knowledge that they did not have before.

As such, they will likely find that Mr. Putin has been a nefarious character to say the least. He’s been killing his political opponents. He’s been imprisoning them. He’s been stealing money from the coffers of Russia and from businesses, so much so that he’s the richest man in the world – [he has a] somewhere around $65 billion net worth. He wants to return Russia to prominence on the world stage. He believes that the collapse of the Soviet Union at the end of the Cold War in 1991 was the most catastrophic event of the 21st century. This is quite amazing given 100 million people were killed in World War II, but he seems to ignore that. Nonetheless, it’s instructive because it has quite a psychological and emotional impact on him.

We see an aggressive Russia that moved into Georgia using force; moved into Crimea again using force and annexed it; moved into eastern Ukraine using force; and has conducted a military incursion into Syria. Russia clearly is provoking the Baltics on a regular basis with flyovers of international air space into the Baltics’ airspace, arousing Russian minorities there, all likely with the ultimate design to challenge NATO in the vicinity of the Baltics, to test whether they would respond. I think Vladimir Putin would see the collapse of NATO  — because of lack of response to a military incursion that he’s conducting – as check mate.

TCB: What advice would you give Mr. Trump in dealing with the Russian threat and also give NATO? Mr. Trump signaled he might walk away from NATO, if the members don’t meet their spending targets.

JK: In dealing with Russia, you must deal with them from a position of strength. It is what Vladimir Putin respects. It is what also helped us collapse the Soviet Union during the Cold War, because we had significant American power, as reflected in a strong economy and a strong military. But we also had enormous political will. In other words, we were a very credible deterrent and to be a credible deterrent, you have to have two things. One is the military capability has to be there. Really, your adversary has to understand it and see it.

Two, you have to have the intent to use it, and your adversary must be convinced that you would use it if necessary. We had that for 45 years, and that was very good. We do not have that now.

We need to have that deterrence to deal with Putin from a position of strength. He must be told quickly that I [Donald Trump] intend to rebuild the United States military, and I intend to use it if necessary. That’s a private conversation amongst some other issues, but unequivocally, Mr. Putin has to understand that, and he needs to see that reality taking place.

Then when Putin tests Mr. Trump, which he will inevitably do, it will almost certainly be to find out what kind of a leader he is, what kind of a man he is. He will do that. I believe with the last two presidents, Putin has won the psychological war against both of them. One sort of liked Putin quite a bit; that was George W. Bush. I think he said he found his soul. The other one fears him, and that’s Obama.

What we want Putin to do is respect us, respect our leader, and respect the capability that we have.

TCB: In terms of NATO, now that you’ve met Mr. Trump and his team, are you more comfortable with their position on NATO?

JK: I don’t know for certain all of Mr. Trump’s positions. I think I – like a lot of Americans – are going to discover them. In general, there’s much that we do know. One is his desire to be a strong American president and a strong American leader in the world. The second thing is, he clearly intends to make certain that America’s military is a far superior force. It’s not enough just to be the best military in the world. You have to be so superior that your adversaries are not going to take you on, and that is what has been eroding over these last years.

TCB: General Keane, we’re seeing Mr. Trump assembling his national security team. Can you tell us a little bit about the role of the National Security Advisor, and how do you think Michael Flynn will define that role?

I believe he has a very close relationship with the President-elect. That is probably one of the main reasons he’s the National Security Advisor.  The second is that he obviously brings to the table an extraordinary amount of expertise in intelligence.

He’ll be involved in policy formulation and strategy, something that hasn’t necessarily been in his portfolio in the United States military. But having dealt with him on a lot of geopolitical issues, he has the capability to be a strategic thinker, and I assume President-elect Trump recognizes that as well.

What the National Security Council does is help with policy formulation and provide oversight to make certain that the policy execution is done in a coordinated, integrated way.

Those all sound good, but I’ll tell you flat out,  a lot of times that doesn’t get done very well.

TCB: You also have to bring everyone to the table, don’t you?

But if you can’t get consensus out of that, that still makes the cloth whole, that’s fine. Take that disagreement to the chief executive. That’s what President’s do; they decide.

For more on GEN Keane’s views on the Trump transition, click here for his 15 Minutes podcast.