At least 50 people were killed and 53 more were injured in an attack at a gay nightclub in Orlando, Florida this weekend, officials said, in the deadliest mass shooting in U.S. history.

The suspect, identified as 29-year-old Omar Mateen, an American citizen born in New York, was shot and killed by police, according to authorities. In a statement on Sunday, President Barack Obama said, “Although it’s still early in the investigation, we know enough to say that this was an act of terror and an act of hate.”

He noted that he had met with FBI Director James Comey and his Homeland and National Security advisors in the wake of the attack, and that the FBI is on the scene and leading the investigation in partnership with local law enforcement.

The president added: “We are still learning all the facts. This is an open investigation. We’ve reached no definitive judgment on the precise motivations of the killer. The FBI is appropriately investigating this as an act of terrorism. And I’ve directed that we must spare no effort to determine what, if any, inspiration or association this killer may have had with terrorist groups. What is clear is that he was a person filled with hatred. Over the coming days, we’ll uncover why and how this happened and we will go wherever the facts lead us.”

In a press conference on Sunday, FBI Agent Ronald Hopper said the FBI was made aware of the gunman in 2013 when he made comments to coworkers alleging possible terrorist ties. Mateen was interviewed twice in that investigation, which was then closed, and he again came to the attention of the FBI in 2014. Agents interviewed Mateen after he had suggested he had ties to American suicide bomber Moner Abu-Salha, who drove a truck filled with explosives into a Syrian government outpost, before detonating it.  But Hopper said, “we determined that contact was minimal and did not constitute a substantive relationship or threat at that time.”

Mateen was not under investigation or surveillance at the time of the shooting, he added.

Hopper also commented on the reported 911 calls made by Mateen where the gunman allegedly pledged allegiance to the leader of ISIS, saying that it was his understanding that the conversation “was general to the Islamic State.” Hopper said the FBI is “looking into any and all connections – domestic and international.”

The Cipher Brief’s Mackenzie Weinger spoke on Sunday with Elaine Lammert, a former Deputy General Counsel for the FBI and a Cipher Brief network contributor, to learn more about what steps law enforcement will likely be taking as the investigation unfolds.

The Cipher Brief: Can you walk us through the next 24-48 hours for law enforcement and the FBI? What key questions will they be asking and what approaches will they be taking to determine more about Mateen’s background, whether he acted alone and what’s behind the attack?

Elaine Lammert: Basically, in the next 24-48 hours, and I’m sure this has already started, the FBI, as the lead agency, in coordination with all the other agencies that are working with them — the state and locals and the other federal agencies — are going to do a variety of things. They’re going to interview any witnesses that were there that at this moment are able to talk to us. As you already know from the news, they’re in contact with the family to find out what the family knew. They’re probably going to see what anyone else in the neighborhood or where he worked, what they knew about this individual. They’re definitely going to search databases and see what might have been out there about this individual.

As soon as they locate a phone, a computer, where he lived, there will be search warrants. That might indicate and might tell us why he did this, what were his motives, how did he prepare, how did he start planning this, how long has he been planning it — things along those lines. That’s happening from the get-go. There’s different teams doing different things, but they’re all coordinating. Obviously, the questions will be geared to find out who he is and why.

TCB: How will the FBI be coordinating with other agencies, like DHS and state and local partners?

EL: They’re all going to work together in terms of what sources they may have, what information they may have in their files, what capabilities they have to help find out some of this information. They’ll work together jointly, probably, in interviews and searches. It all depends on what the evidence is uncovering, what is being developed and where it’s leading them. We work together on all of this to see how we can determine what happened. With the FBI, as the President said, the FBI has the lead, but we always coordinate — it’s joint, it’s collaborative.

TCB: What kinds of difficulties does law enforcement generally face if the attacker is a lone wolf?

EL: The problem with a lone wolf is very much that they act alone. The definition of a lone wolf is someone who acts alone, is not necessarily part of an organization, and might be inspired or sympathetic to [a group or ideology]. That’s the difficulty, number one.

Number two, I think, because of that, unless someone sees something and reports it, or there’s something else that comes on the radar, the lone wolf’s actions are occurring in a certain amount of anonymity. And so that’s the difficulty—they work alone.

TCB: What else would you suggest observers and the media take into consideration as this investigation unfolds?

The Author is Elaine Lammert 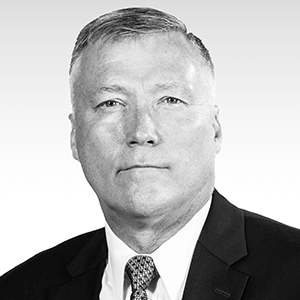