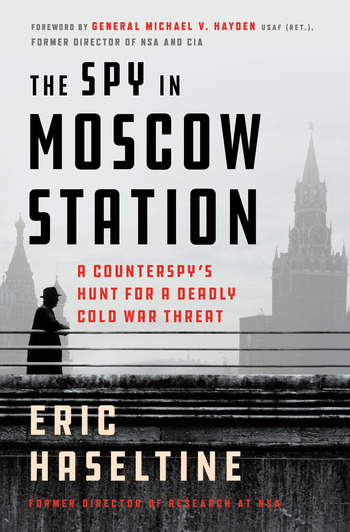 The Spy in Moscow Station

While reading The Spy in Moscow Station, I kept noticing a sub-tone emanating from the narrative, a steady low signal, like tinnitus through a subwoofer. I couldn’t place the noise, but it felt familiar and more than a little grating. It was, I eventually realized, the sound of an axe being ground.

Written by former NSA, ODNI and Disney executive Eric Haseltine, The Spy in Moscow Station tells the story of NSA officer Charles Gandy’s relentless quest to discover Soviet technical penetrations of the American embassy in Moscow during the last years of the Cold War. From a technical operations standpoint, Haseltine tells an interesting and important story of the dangers of underestimating or misunderstanding the technical capability of adversaries. While the events depicted are four decades in the past, the technology remains relevant today, and the book contains lessons to guard against complacency in today’s world of pervasive cyber warfare. However, Haseltine does a poor job of conveying or capturing a wider intelligence and counterintelligence picture of Moscow. The book is further undermined by a whiff of unforgotten grudges and depiction of specific encounters which strain credulity.

Charles Gandy was a career NSA specialist who rose to lead the Agency’s tightly compartmented “R9” Research and Development Group.  With unique insights into the power and capability of NSA’s own tools, he was uniquely positioned to understand American vulnerability to Soviet technical operations. He felt that the U.S. government in general, and that CIA and Department of State in particular, were dismissive of Soviet technical capabilities as being hopelessly backward and posing little threat.

As one example, the Soviets were known to be bombarding the Moscow Embassy with high-power electromagnetic signals and microwave radiation known in the community as TUMS (Technically Unidentified Moscow Signals). U.S. specialists did not understand the purpose of the signals and thus discounted the threat. Gandy, however argued that the Soviets were using the radiation to exploit implanted listening devices, but more significantly, inherent vulnerabilities of modern electronics— audio speakers, typewriters, photocopiers and other devices – which could be teased into giving up information without physical alteration. (One wonders if recent reports of “sonic attack” induced illness and brain damage to officers in Havana and Beijing are linked to modern variants of the Soviet practice.) Gandy believed information leaks from these systems were behind an array of compromises including the arrests of CIA officers Martha Peterson and Vince Crockett on the streets of Moscow. Gandy was a Paul Revere, shouting that the Russians were coming, ignored by skeptical and jealous rival agencies. In some respects, he was certainly right. The resistance of organizations and individuals to suggestions of technical vulnerability is enduring, and Gandy certainly encountered both bureaucratic and personal resistance to his messages.

But in telling this story, Haseltine largely ignores the fact that intelligence operations are far more likely to be compromised by human penetrations than by technical surveillance. The Peterson and Crockett arrests were related to separate well-documented compromises. In focusing on technical operations as the source of leaks, Haseltine ignores the laundry list of American NSA, CIA, State and FBI officers recruited by the Soviets and their allies that are known to have compromised CIA and NSA operations. Further, in order to protect its own agent sources, the KGB regularly used disinformation and misdirection to attribute any arrest or compromise to technical penetrations or tradecraft failures on the part of the CIA. Nevertheless, Haseltine portrays Gandy’s search for technical devices littered throughout the embassy as the singular thread which would keep CIA’s Russian assets alive and Embassy communications safe.

Gandy was brought to Moscow in 1978 at the request of legendary CIA Moscow Station Chief Gus Hathaway to provide deeper expertise in assessing the Embassy’s technical security. Hathaway was grappling with how to handle a recent Soviet intelligence volunteer, Adolph Tolkachev, and sought to assure both himself and CIA Headquarters that suspected technical penetrations of the embassy would not compromise station operations. Gandy’s hunt for technical penetrations coincided with a key discovery – a secret passage built into embassy walls to house a movable antenna which was likely used to pick up signals from low power devices planted elsewhere in the embassy. Gandy also recorded mysterious short burst signals – electronic click and pops, the source of which could not be determined. At the time however, the source of these signals remained a mystery.

In 1984, as part of Operation Gunman, Gandy returned to Moscow to follow up on the security of American communications equipment following the French discovery of Soviet implants in French Embassy teleprinters. With this key lead, the Americans removed sensitive equipment from Moscow and subsequently discovered that at least 16 IBM Selectric typewriters in the Moscow Embassy and Leningrad Consulate had been compromised with Soviet implants stretching back to 1976. Gandy played a key role in the analysis and subsequent discovery of the devices, but Haseltine glosses over the fact that these discoveries would not have been made without the original French information. The compromise of the IBM typewriters was both sophisticated and significant, but there was no indication that this extended to separate CIA data processing and communications equipment. Nor has there been any serious suggestion that the Gunman typewriter implants led to any compromise of CIA assets or operations.

The technical descriptions of Gandy’s work hunting Soviet signals and hidden implants are detailed and convincing, but the accounts of his personal interactions at CIA Headquarters, at the Moscow Embassy, and on the streets of Moscow are bizarre, even a bit paranoid.

In one instance, just before his first visit to Moscow, Gandy recounts being called into an impromptu meeting by two young officers, supposedly from the Directorate of Operation’s Soviet East European Division, who pitched him to conduct operational activity on the streets of Moscow. His description of the encounter and the request is deeply implausible – the CIA and Moscow station simply did not use untrained officers from other agencies to conduct street operations and would not have approached Gandy to do so. In other odd vignettes in Moscow, Gandy describes his practice of searching out camera-toting “tourists” at the embassy cafeteria to sit with at breakfast so that his cover wouldn’t be questioned; of death stares from suspected KGB surveillants in black fedoras, of Svetlana-like Russian beauties knocking on his apartment door IN THE Embassy, and of a man dressed as an elderly babushka accosting him on a trip out of the embassy to buy souvenirs. The stories have the feel of an overactive imagination, but they may also simply reflect Haseltine’s efforts to dramatize the narrative by juicing the perceived danger.

I’m left with the question of what the book’s title, A Spy in Moscow Station, has to do with anything that actually occurs in the narrative. The book does not describe a Russian agent in Moscow Station, it does not reveal any technical penetration of Moscow Station and it does not recount the story of any officers assigned to Moscow station. So, is Gandy himself the “Spy” in Moscow Station? It would be an odd reference in that he was neither a spy, nor assigned in Moscow station nor even present in Moscow for anything other than a few short visits. The confusion of the title reflects why the book is ultimately unsatisfying. In trying to dramatize Gandy’s role and story, Haseltine uses generalization, cliché and exaggeration which ultimately detracts from Gandy’s story and degrades understanding of the wider security and counterintelligence issues being addressed.

This book earns a disappointing one out of four trench coats.

Paul Kolbe served 25 years as an operations officer in the CIA. He spent multiple tours in the former Soviet Union including as Chief of Station. As Chief, Central Eurasia Division at CIA headquarters he was responsible for CIA’s activities in Russia, Eastern Europe, the Balkans and Central Asia.

The Author is The Spy in Moscow Station

3 Replies to “Who Exactly Was the Spy in Moscow Station?”