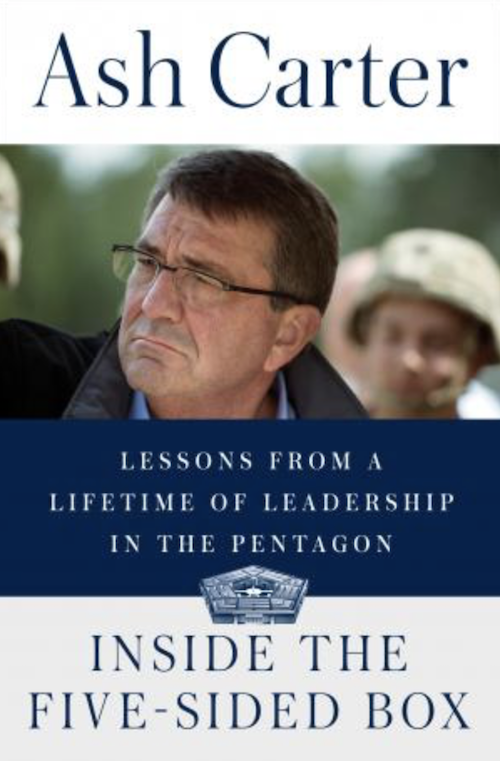 Inside The Five-Sided Box

BOOK REVIEW:  Inside the Five-Sided Box: Lessons from a Lifetime of Leadership in the Pentagon

Carol Saynisch is a Washington state-based journalist/geopolitical analyst. She has worked with Pentagon-connected international defense contractors since 1994 and has written scenarios and simulated media products for NATO and U.S. forces.

Ash Carter is a left brain AND a right brain kind of guy.

Somewhat incongruously, the United States’ 25th secretary of defense is an academic with Ivy League degrees in both physics and medieval history, literally creating a link between the Nuclear Age and the Middle Ages within one indisputably brilliant, intellectually curious cranium.

But he is also the ultimate savvy Washington insider, spending 36 years in the Pentagon in a succession of increasingly influential jobs serving presidents from Ronald Reagan through Barack Obama, along the way developing the kind of street smarts needed to thrive and survive in that rarefied and highly combustible environment.

As he details from his steel-trap memory in his memoir, Inside the Five-Sided Box: Lessons from a Lifetime of Leadership in the Pentagon, Carter first landed in the military-industrial complex’s ground zero in the early 1980s as a nuclear weapons advisor for Reagan’s ill-fated Strategic Defense Initiative (Star Wars). Over the years, he worked his way up to hold the top three jobs in the Department of Defense. In the twilight of his presidency, Obama tapped Carter in late 2014 as Secretary of Defense (SecDef) to replace the volatile former Senator Chuck Hagel.

Throughout his career, Carter seems most proud of his ability to think outside of the five-sided box, find solutions to problems that appear unsolvable, and maintaining an apolitical stance while speaking truth to power.

Convinced the proposed space-based nuclear shield known as Star Wars is a dumb idea? Boldly and bluntly tell Reagan – while wearing your nuclear-physicist’s hat – that it lacks technical merit even though you risk becoming a pariah as your Pentagon career is just getting off the ground.

Not enough drones to gather aerial intel in Afghanistan? No problem—just float some aerostat blimps over forward operating bases until enough of the right UAVs can be procured.

IEDs and landmines blowing up too many of our troops patrolling in puny HUMVEES? Authorize the development of brawny mine-resistant ambush protected (MRAP) vehicles.

As under secretary of defense for acquisition, technology and logistics, the job he held before moving on to deputy SecDef, Carter gleefully referred to the position as “acquisition czar,” a sort of grand poobah possessing the power to hold the department’s $700 Billion purse strings in his hands while overseeing contracts, weapons procurement and equipment development. It was a role for which he was uniquely suited and one that he says served him well when he rose to the position of SecDef by providing context, perspective and ethical imperative to the vast responsibility the top job entails.

As SecDef, he was part of a short chain of command that issues orders to send America’s fighting forces into harm’s way. The chain starts with the president and ends with the combatant commander, with Carter in the middle – and always with the welfare of the troops in mind.

Taking responsibility for hammering out and scrubbing overarching battle plans known as CONOPs (concept of operations) seriously, as a new SecDef he rankled at the prospect of other bureaucratic fingers poking into that chain of command.

As he describes it, “…the procedure as it had evolved prior to my appointment called for a CONOP recommended by the SecDef to be referred to the NSC (National Security Council) staff for ‘interagency review.’ In practice, this meant that the CONOP from the number two link in the chain of command would be vetted by a committee of mid-level officials from the NSC staff, the State Department, the Office of the Director of National Intelligence, the Central Intelligence Agency, and any other entities that might be involved. I could not accept this procedure.”

Carter deftly changed what could have devolved into time-sucking interagency meddling by consulting with those “other entities” early in the process before the CONOP was fully formulated.

“I would reserve my own recommendation to the president until after I’d received the views of other agencies and incorporated those views into the CONOP. In this way, I protected the integrity of the chain of command while making room for the value of interagency expertise in formulating operational plans,” he writes.

This anecdote is illustrative of how difficult and complex the SecDef’s job really is. Not only does it involve incredibly difficult daily life-and-death choices, expenditures beyond reckoning, and possessing a preternatural ability to take second, third, and fourth order of effects into account, but it plays out against an internecine backdrop of turf battles, interagency agendas, and complicated type-A personalities.

Carter’s time at the top of the DoD saw creating battle plans to defeat ISIS, approving women to serve in combat positions previously denied to them, providing countless congressional testimonies on an array of issues, negotiating with international counterparts, and logging thousands of claustrophobic miles inside the SecDef’s specially tricked-out, windowless 747.

Maintaining his determination to be apolitical throughout the book, he nevertheless makes an occasional sideswipe at the way the Trump administration conducts itself without drawing blood.

While his memoir doesn’t inspire the kind of breathless “breaking news” buzz successor Jim Mattis’ newly published account of his own time as Trump’s SecDef is generating, Inside the Five-Sided Box is a solid procedural on how things get done…and undone…within the Department of Defense, squarely aimed at a civilian audience unfamiliar with that world.

Working for the last 25 years as a contracted trainer with U.S. and NATO security clearances on more than 200 military exercises in the United States, Africa, Europe and Asia, I can appreciate how difficult it must have been for Carter to keep his military acronym count to a minimum and filter out any possible classified information from his extensive Pentagon memories.

This book earns a solid three out of four trench coats.

The Author is Inside The Five-Sided Box 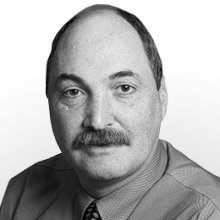