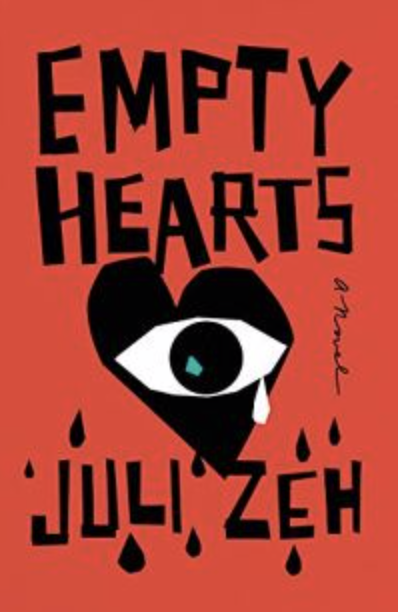 Carol Rollie Flynn is CEO/Managing Principal at Singa Consulting and a 30-year veteran of the Central Intelligence Agency where she served as Executive Director of the CIA’s Counterterrorism Center, and Chief of Station in major posts in Southeast Asia and Latin America, and a Clandestine Operations Officer in Africa and Southeast Asia.

Juli Zeh’s new and entertaining dystopian thriller is set in Germany in the not too distant, post-Trump future. The Western block is crumbling under a wave of nationalism: Brexit and Frexit are a fait accompli; the Swexit (Sweden) and Spexit (Spain) movements are in full bloom; and the U.S. and Russia have agreed to dissolve the UN. The ultra-nationalist and populist Concerned Citizens’ Crusade (CCC) now controls Germany and is bent on systematically dismantling democracy for the good of the people. In response, Germany’s weary citizens have become increasingly inward-focused and apolitical.

In this milieu, Britta Söldner runs The Bridge, a suicide prevention counseling practice with a twist: patients who can’t be cured of their self-destructive inclinations are matched with extremist organizations in order to carry out suicide attacks. This highly-lucrative boutique operation is run under a strict set of rules, devised by Britta, to maintain the utmost secrecy for its patients and clients, and to minimize any casualties and damage resulting from suicide attacks. Britta is aided in this enterprise by Babak, a brilliant Iraqi immigrant who has developed an internet-scraping algorithm to identify prospective patients that exhibit the right mix of suicidal predilection and altruism.

Britta is also a wife, mother, and the principal breadwinner for her family, which she micromanages with the same perfectionism as her business. Her ample earnings from The Bridge have enabled a very comfortable life for her husband, an entrepreneur whose start-up has yet to generate a profit, and her seven-year-old daughter. Neither her husband nor daughter knows the true mission of The Bridge, and neither are particularly curious. They live in an immaculate and stylishly appointed “concrete cube” where “everything’s organized, everything’s taken care of.”

Britta’s perfect world starts to unravel, however, after a failed suicide attack at Leipzig Airport. While she is certain that The Bridge had no role in the attack, a series of unsettling events ensue, including multiple sightings of a suspicious vehicle, a mysterious break-in at The Bridge’s office, and the appearance of a wealthy investor who suddenly wants to bankroll her husband’s company. Sensing imminent danger from an unknown rival, Britta, Babak, and their newest and perhaps quirkiest patient go underground to regroup and formulate their next steps.

Ably translated from the original German, Empty Hearts is a page-turner that both entertains and ponders the universal themes of power, morality, and the human condition in the 21st Century. Reminiscent of Ray Bradbury’s Fahrenheit 451 but with considerably more humor, Zeh creates compelling and all too human characters who grapple with dysfunction both in themselves and the world around them in an all too believable future.

While starting a mite slow, Zeh’s engaging writing style and intellectual dexterity soon draw you in as this rousing tale, with logical but unexpected plot twists, careens toward an ending that is both surprising and satisfying. Like many great works, behind the exciting and humorous surface, however, Empty Hearts raises serious and troubling questions about where the West is headed and how we as individuals might, or should, respond. In short, the book is both fun and thought provoking, and thus worthy of a four trench-coat rating.

Empty Hearts earns a prestigious four out of four trenchcoats

The Author is Empty Hearts