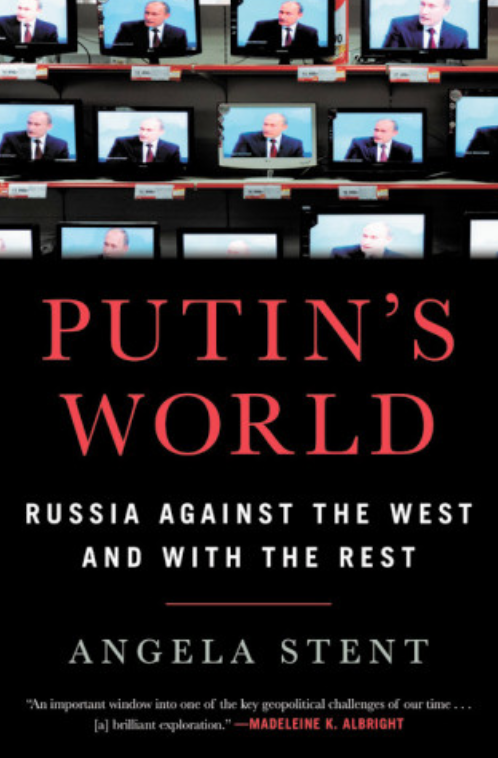 BOOK REVIEW: Putin’s World: Russia Against the West and With the Rest

Vladimir Putin, enormously popular in Russia yet reviled in the West, avidly courting, and courted, by other nations, has become one of the most studied – and most militant –leaders on the world stage today.

Just in the past five years, Putin has seized Crimea, sparked an insurgency in the eastern Ukraine, intervened militarily in Syria, and interfered in the presidential election of his main adversary, the U.S.  All of these policy moves are interrelated parts of Putin’s strategy to restore Russia’s status as a global superpower and counter the West’s perceived attempts to undermine his country.

In Putin’s World, Professor Angela Stent, award-winning scholar on Russia, provides a compelling and comprehensive analysis of Putin’s foreign policy, including the historical reasons behind it, its ultimate goals, and Russia’s most important relationships with major nations around the globe. She concludes her study with useful suggestions for U.S. policymakers to manage this critical geopolitical challenge in the future.

The opening chapters of the study are critical reading for understanding Putin’s foreign policy. Briefly, that policy emerged as a desire to restore Russia’s global prestige after the West’s perceived sabotage of the country immediately following the collapse of the USSR. True, but as Stent notes, this is an oversimplification. Putin’s strategy is deeply rooted in a national vision of Russia that dates back centuries and shapes both his foreign and domestic policies.

The “Russian idea,” as Stent calls this vision, is the centuries old national faith in the country’s unique culture and its messianic destiny to be a global force, a bridge between East and West, and a moral bulwark against the corrupt and decadent West. This vision is isolationist, xenophobic, virulently anti-democratic and prone to conspiracy theories about outside forces (i.e., the West) undermining Russia at every turn, the “us against them” mindset that spawned Putin’s hostility toward the U.S. and Europe today. Putin increasingly embraced this “Russian idea” as his rule progressed – – in various speeches, he increasingly cited Russian philosopher Ivan Ilyin, a conspiracy theorist and fervent advocate of Russia’s unique destiny.

Stent’s cogent examination of the “Russian idea,” does not augur well for any substantive change in Russia’s aggressive foreign policy in the short or even long term. The vision of Russia’s unique destiny is so ingrained in the national psyche that its “… traditions and self-understanding… precede Putin and will surely outlast him.”

The importance of historical context also features prominently in subsequent chapters of the book that detail Russia’s pre-Putin relationships with key regions and nations: the former Soviet republics or “near abroad” (including the Ukraine), the U.S., Europe (including NATO), China, Japan, Turkey, and the Middle East (Syria, Iran, Saudi Arabia, Israel). To reassert Russia’s global status, Putin has resorted to force both to guarantee his sphere of influence in neighboring areas (Georgia, Crimea and the Ukraine) and restore lost influence abroad (Syria). But a theme Dr. Stent emphasizes is that, while Putin’s policy is designed to counter the U.S. and Europe, he has fostered a highly personal engagement throughout the world with both friendly nations and former adversaries. In most cases, he has gained a foothold in these countries through Russia’s considerable energy and raw material resources, arms sales, and by often exploiting a nation’s tangled relations with other competing states.

Putin’s intervention in Syria reestablished Russia as a major player in the Middle East, though, as Stent notes, he has been helped by the U.S.’ “uncertain policy” toward the region. Since then, he has cultivated relationships with, among others, Israel, Turkey and Saudi Arabia, all bitter foes during the Cold War. In similar fashion, Putin has pivoted away from Europe towards China and fostered a cordial relationship with Japan, despite an intractable territorial dispute dating back to the end of World War II.

While Putin has certainly succeeded in spreading Russian influence throughout the globe, Stent indicates that his outreach does not necessarily guarantee success. In her view, Russia has no real allies, just “self-interested partners,” and each bilateral relationship is fraught with competing goals and interests. China, for example, cooperates with Russia to counter U.S. hegemony but does not recognize it as an equivalent global power, a sticking point that, as Stent elegantly puts it, “limits the nature of their embrace.”

While Stent details Putin’s indisputable accomplishments, she also underlines the many pitfalls that could frustrate the realization of his historic vision. A policy that relies on past glories and grievances is unsustainable in the complex disorder of 21st century international relations. Also, Putin’s foreign adventures and their resulting boost to national pride “mask serious domestic weaknesses.” Putin’s unwillingness to implement economic reforms could doom the country to Brezhnev era stagnation or worse, considering other problems like widespread corruption, a falling birth rate, reduced social spending, and increasing brain drain.

At the end of the book, Stent cautions policymakers not to repeat past mistakes in dealing with the Kremlin: “The West must recognize what Russia is, not what the West wants it to be.” While this advice may guide decision making, she is careful to avoid any sweeping predictions –- sound judgment considering Putin’s surprise moves in the Ukraine and Syria. As she says in the book’s final line, “In Putin’s world, it is prudent to expect the unexpected.”

Putin’s World is an excellent, well organized and easy to read study for laymen interested in modern day Russia as well as for those steeped in what Churchill dubbed, “a riddle wrapped in a mystery inside an enigma.”

Michael Sulick was the director of CIA’s National Clandestine Service and is currently a consultant on counterintelligence and global risk assessment.  While at the CIA, he was also Chief of Counterintelligence and Chief of the Central Eurasia Division where he was responsible for intelligence collection operations and foreign liaison relationships in Russia, Eastern Europe and the former republics of the Soviet Union.

The Author is Putin’s World

Michael Allen is the Managing Director of Beacon Global Strategies LLC.  From 2011-2013, Mr. Allen served as the Majority Staff Director of the House Permanent Select Committee on Intelligence (HPSCI) under Chairman Mike Rogers (R-MI).  Prior to joining the HPSCI, he was director for the Bipartisan Policy Center's successor to the 9/11 Commission, the National Security Preparedness Group, co-chaired by ...